Ugly American Tourism: A Self Portrait

Last night I flipped through the journal I kept when I visited France in my late teens. It was a slightly embarrassing journey into some early stage ugly American tourism, the girlish ramblings of a teen whose seven years of French class didn’t make themselves known until almost a week into the visit.

Plus, I was boy crazy, as you can see from this passage:

I told R. I liked cafes because I like to people watch and eavesdrop. He said I was a concierge, “une personne qui  travaille a une appartement et met la poubelle a la porte, et qui entend et  voit tout qui passe.” (a person who works in an apartment building, takes the trash out and hears and sees everything that goes on) In other words, he thinks I’m nosy. It’s too bad that he feels that way, because I think he’s really  cute.

Anyway, there I was, living with a wonderful family in the Parisian suburbs. Here’s how I wound up in their house: My sister and I met their son (a podiatry student) and his friends on a Florida beach and started hanging out with them. The podiatry student and I became pen pals – he wrote me in English, I wrote him in what I learned was poor French – and within months he invited me to stay with his family the following summer.

So there I was, living with French people and incredibly anxious about my inability to say more than “Oui” or “Non.” The following is my account of when I dared to begin butchering one of the world’s most beautiful languages:

Mme. and I got up early this morning to go to Giverny. The drive was two hours long so I had to talk, otherwise I would have gone crazy sitting in the car, saying “Oui”…”Non”…”Oui” for that long.

We got there at 10 a.m. and toured Monet’s gardens. There are gardens in this world and then there are the ones I saw this morning – sheer paradise, just breathtaking. I’ve never seen so many different types of flowers in my life!

After Giverny we drove to Vernon, visited an old cathedral, then had this huge, amazing lunch complete with wine. We toured chateaus and talked (Yes, talked! I’m speaking French! Finally!) and things seemed easier as the day went on. I fell asleep in the car on the way back to the house. When we got back, Mme. exclaimed “She’s talking!!! She’s talking!!!” Rapid fire discussion ensued in the house; everyone was curious about what I saw, what I thought, what I actually talked about.

All I could do was shrug and said “beaucoup.”

In a week I will be in Paris with my family. It has been 16 years and I am really looking forward to seeing the city without the wide-eyed, breathless stupidity naivete of a garden variety American teenager. Though we have a rough itinerary of things to do on this trip, I regret to inform you that I will be unable to take classes with Patricia Wells, the James Beard Award-winning cookbook author.

But apparently this is not something you can just show up and do. This has to be planned at least a year in advance. It also entails a second mortgage, let’s just say.

That’s all right, folks. I think I will just mess with one of her recipes instead.

Asparagus Veloute
from “The Paris Cookbook” by Patricia Wells

Ingredients:
2 TBS extra-virgin olive oil
fine sea salt to taste
1 leek (I used green onions because I had them handy), white portion and most of the green, rinsed and cut into thin rings
About 1 lb. green asparagus stems, finely chopped
About 1 ½ cups chicken stock

Directions:
1. In a large pot, combine the oil, a pinch of sea salt and the leeks. Cover and sweat (cook over low heat without allowing leeks to color) until soft and translucent, about five minutes. Add the asparagus, cover and sweat about five minutes more. Add the chicken stock, cover and simmer over low heat for 15 minutes.
2. Transfer the mixture to the bowl of a food processor and process to a puree. Pass the soup through the fine blade of a food mill to remove remaining fibers and create a smooth, velvety texture. (I guess I’m a slacker because I just put the mixture in a blender and pureed it) Taste for seasoning. Outside of salt, a few pinches of black and white pepper are mandatory. 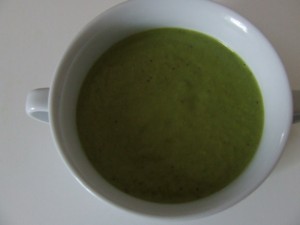