Two weeks removed from graduate school, it is clear to me how they lure you back for things like PhDs. I’ve grumbled in prior posts like this one about all the things I hope to read once I can make my own reading choices. But the thing is: I’m still mostly reading about France, even though various social media connections equipped me with a lengthy list of books to try once I emerged from my tricolor hangover.

There are worse problems to have. After all, I really do like France, perhaps even more than before. So right now, I think I’ll start using this oft-neglected space to talk about some of the books I’m reading, my limitless Francophilia and whatever else seems to make sense. 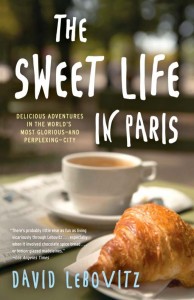 The first book I read after successfully defending my master’s thesis was David Lebovitz‘s The Sweet Life in Paris. Lebovitz, a cookbook author and former pastry chef at the famed restaurant Chez Panisse, moved to Paris after his partner’s death. Sweet Life is, in part, his memoir of starting over, but also a hilariously funny account of life the City of Light. Whether he’s grappling with French painters, dressing up to take out the trash or mastering the Gallic art of cutting in line, Lebovitz shows readers that his days don’t begin with a croissant and a copy of Le Monde and don’t end in a heated discussion about Sartre in the Latin Quarter. If anything, Lebovitz finds that life in Paris involves illogical rules, apathetic shopkeepers, unfathomable rudeness and maddening bureaucracy at almost every turn. His anecdote about returning a cell phone charger to Darty, the French equivalent of Best Buy, is one of the best in the book (in part because I experienced something similar in quite possibly the same exact store this past January). And, his various observations about strikes, waiting in line, opening bank accounts and getting help from the locals are laugh out loud funny, in large part because they are not at all mean-spirited. Lebovitz loves and accepts his adopted city, warts and all, and manages to see it through rose-colored glasses:

If you’ve ever walked through Paris at night, you can’t help noticing that its beauty is magnified in the darkness; lights glow softly everywhere and frame the centuries-old buildings and monuments in spectacular ways. I remember that evening breathing in the damp air rising off the Seine, watching the Bateaux Parisiens gliding on the river, loaded with awestruck tourists, and illuminating the monuments in their wake, their dramatic light hitting a building for just a few moments before moving on to the next.

My one incredibly small (teensy, almost invisible, and totally nerdy) quibble with this book is its characterization of the reconstruction of Paris in the nineteenth century. Baron Georges-Eugene Haussmann, as Lebovitz writes, rebuilt the city to change the way Parisians moved. In fact, reconstruction not only changed the way people moved, but prevented the spread of cholera and revolution. The goal was modernization and under Haussmann, the city blasted through neighborhoods to create broad avenues, posh green parks and glittering new monuments such as the Palais Garnier. Paris looks the way it does today because of these efforts. But the only reason I know that is because I’m a French history geek who wrote about the subject in my thesis. Lebovitz, meanwhile, could school the hell out of me on proper macaron technique (which is something I’m working on and I’ve got a ways to go).

Speaking of sweet life, Lebovitz ends each chapter with a recipe related to a meal or moment about which he writes. Many of the recipes are in his pastry wheelhouse (I’ve dog-eared the chocolate macaron one, as well as the one for chocolate spice bread), but there are also enticing takes on fig-olive tapenade, chicken mole and warm goat cheese salad that I aim to try in my own kitchen. Everyone defines the sweet life differently, and Lebovitz’s memoir is one of my favorites in the genre. Francophiles and foodies will love it, as will anyone who has ever grappled with starting over.

I give it four and a half out of five stars.

And I think it would pair well with a crisp glass of Sancerre.