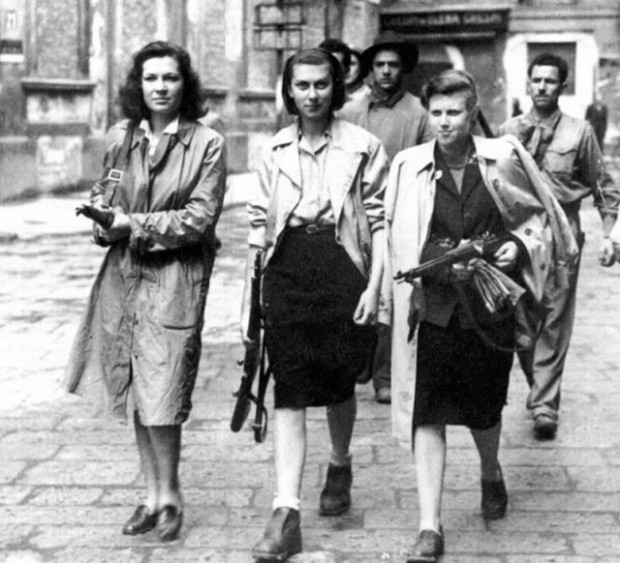 I’ve been sourcing photos both for an upcoming class and for my book and came across this gem: three female resisters patrolling a street in France during World War II. Although my class starts in two weeks, some eager students have reached out to me about extra reading materials (!!!). So far, I’ve steered them toward the Kristin Hannah’s The Nightingale , a recently released — and lovely — novel about two sisters and the choices they had to make during the Occupation. One student emailed me after she was done and said she could barely see the last chapter, she was crying so hard. So I recommended it to two other students, and am eagerly awaiting their reactions too.

(Rubs hands together in perverse delight).

Ronald Rosbottom’s When Paris Went Dark: The City of Light Under German Occupation, 1940-1944 is another recent(ish) release that I’ve been pushing on the curious hordes. What I liked most about this is Dr. Rosbottom’s depiction of how ordinary — and not-so-ordinary — Parisians coped with life under the Nazis. He uses a lot of rich detail here, from a wide range of sources, so I’m hoping folks make a point of diving into this too. It’s very well done.

I’ve also tossed out various memoirs written by French resisters, and other books based on my students’ area of interest from this period. I look forward to seeing what they bring up in class after diving into this extra work and anticipate that our time together will fly right by.

Any books (fiction or nonfiction) you might add to the mix about the French Resistance, Occupation of Paris or World War 2?  Let me know in comments.