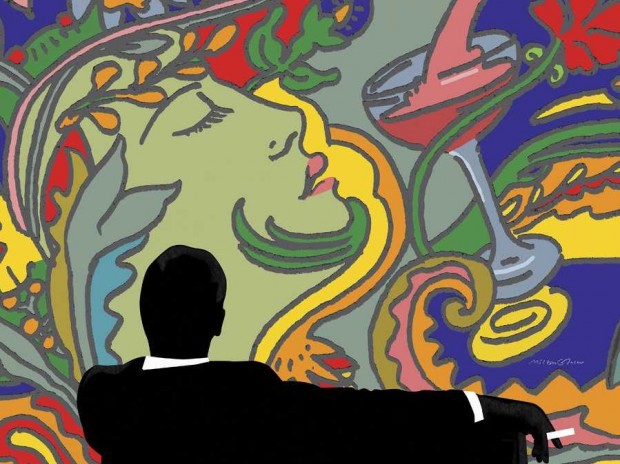 Mad Men’s final season began last night and because we don’t have cable in this house, I won’t be able to see it until later. So because I tend to be one of these people who shakes presents before Christmas Day, I’ve already read most of the season premiere recaps on the Internet. I’ll spare you those, but share a few other interesting reads:

The Atlantic has an interesting first person piece written by a man whose parents were real-life Mad Men.

The New York Times writes about how the series has given stars like Neve Campbell a chance to reinvent themselves.

Refinery 29 interviewed January Jones (Betty Draper Francis), who says the show should end before anyone gets sick of it.

FastCoCreate has an interesting piece on formula-free storytelling and the Mad Men writers’ room.

And The Boston Globe looks at Mad Men’s wardrobe, always a fun topic…

In Defense of Writing

Howwwww is this possssibbbblllllle???? I loved to write when I was a little kid!!!!

Apparently, loving writing makes me weird. Math is more fun for children because they’re solving puzzles and playing with little plastic sets of ten and sometimes even Gummi Bears, if they’re lucky. Writing involves too much memorization (i.e. spelling words) and rules, and requires just too much work in general.

In kidspeak, writing is what they call borrring.

This revelation emerged as a general aside during a parent-teacher conference I had this week. It had nothing to do with my own kid. Although I do know that good writing requires work, as a writer I’ve never perceived that my job is boring. I love what I do and am prepared to beat someone up after school (you heard me) in the interests of defending my craft. So, filled with more than a hint of righteous indignation, I asked the teacher if there was any way I could help her show kids why writing is a good thing, an important thing, and even . . . (wait for it) a fun thing. Although I’m not sure if she’ll take me up on it, she said yes, she’d like me to come in after the first of the year. The good thing about this is that it gives me plenty of time to construct some pro-writing propaganda about how writing is the best thing in the world, ever, so there. I’m in this to win hearts and minds, after all.

Rebecca Wallace-Seagall wrote an impassioned defense of creative writing classes in schools, drawing from her experience as executive director of New York City’s Writopia Lab, a nonprofit that runs writing workshops for children aged 8 to 18.  Wallace-Seagall’s piece is part of The Atlantic’s education series “Why American Students Can’t Write”. Over the next two years, public school students in 46 of 50 states will have a writing curriculum that favors clarity over self-expression and Wallace-Seagall believes that good writing in any genre requires logic and precision. She writes:

If young people are not learning to write while exploring personal narratives and short fiction, it is because we as educators need more training — or the specifics of the curriculum need more development. It is not because those forms of writing in themselves are of no use . . . Human beings yearn to share, reflect and understand each other, and they use these reflections to improve the state of things, both personal and public. If we want our students to have this kind of impact, we have to teach them how to express themselves with both precision and passion . . . where would we be as a nation if we graduate a nation of people who can write an academic paper on the Civil War but have no power to convey the human experience? If Frederick Douglass had stopped writing his narrative on slavery because he felt he could not be at once a lucid communicator and an expressive, emotional being, where would this world be?

Indeed, where would it be? I’m hoping I can do my part, in whatever little way, to help another generation care about words — how they feel on your tongue, how they look on the page and how they sound to your ears and heart when a little symphony spills from your pen.

I hate to say this, but when I worked full-time for a newspaper, I used to sit there late at night (all alone, except for my teddy bear) and quietly think about how beats were sort of a drag. I’m the sort of person who gets interested in something and wants to follow my interest, or who wants to get a sense of other people’s interests and write about why they’re so interesting.

It’s probably the reason why I wound up freelancing for so long.

It also may be why I’ve spent the past two years in graduate school. Media just aren’t interested in stories about nineteenth century Europe anymore, it being the twenty first century and all. It’s really a shame.

Over the weekend, Gideon Lichfield, global news editor of The Atlantic’s new business site Quartz, wrote an interesting (and, in my opinion, welcome) post about the death of the beat.

First of all, let’s talk about phenomenology for a second here because it’s in my nineteenth century geek wheelhouse. What is phenomenology? In really simple terms, it’s a study of how and why the human consciousness becomes aware of certain things. Here’s a more detailed (and sometimes confusing) description of it, which will introduce you to Edmund Husserl and show you how Husserl’s thoughts gave way to existentialism and visions of deep people in French cafes.

What does phenomenology have to do with news? Actual newspapers made of paper that you can hold in your hands (not the nouveau tablet stuff) are divided into sections that need to be filled with stories. That section mindset made its way to web publications, but Lichfield points out that may not be a good thing and so Quartz will have a more fluid model of ever-changing obsessions to reflect a world that is, well, ever-changing.

That makes sense to me. And it actually sounds like a hell of a fun place to be a reporter.

We want to reach a global, cosmopolitan crowd, people who see themselves as living “in the world”. They are keenly aware of how distant events influence one another; their lives and careers are subject to constant disruption from changes in technology and the global economy.

This is both a practical and a philosophical shift. Practical, because reporting these themes within a traditional beat structure is difficult: they often cut across beat boundaries, taking in politics, economics, technology, and other issues. Our journalists have to be, to some extent, all-rounders, who aren’t afraid to get outside their usual expertise and track the topic they’re following wherever it leads.

And philosophical, because it means changing what might (a little pretentiously) be called the phenomenology of journalism. Phenomenology is about how we structure our experience of the world. Beats provide an institutional structure. Obsessions are a more human one.

What I mean by this is that when people notice a change in the world around them—a phenomenon—they don’t care what beat it belongs to; they just want to know what caused it. The institutional framework answers the question like the blind men in the Indian parable who are brought an elephant and asked to say what it is. The one who touches the elephant’s leg says it is a pillar or tree trunk, the one who feels the tail declares it to be a rope, and so on. But to unpack something like the financial crisis you can’t simply talk about securities, interest rates and banking regulation; to understand China’s activities in other parts of the world you need to be more than just a China specialist; to comprehend climate change you need science, economics, domestic and international politics, and more besides. To explain the world’s big phenomena you need to see (or feel) the whole elephant.

The only Paris Syndrome I have is that I am in a chronic state of wanting to be there. Yet, today I learned that there is a sinister version of my malaise that afflicts about 20 people a year, many of them Japanese tourists. The tourists in question seem to want to flee the city as soon as they arrive.

The problem: Perception. Some first-time visitors believe that they will always have Paris and that it will be a sepia-toned place where everyone wears couture, eats beautifully-presented meals and lives, sleeps and eats romance. Although the city is sort of like that, it’s also sort of not. And this “not” aspect is what has newbies feeling so blue.

Just how blue? Paris Syndrome symptoms include: hallucinations, feelings of persecution, dizziness, anxiety and sweating. According to the French psychiatric journal Nervure, the crise is sparked by language barriers, cultural differences, exhaustion and an idealized image of the city.

Granted, the Seine does not flow with Chanel No 5 and