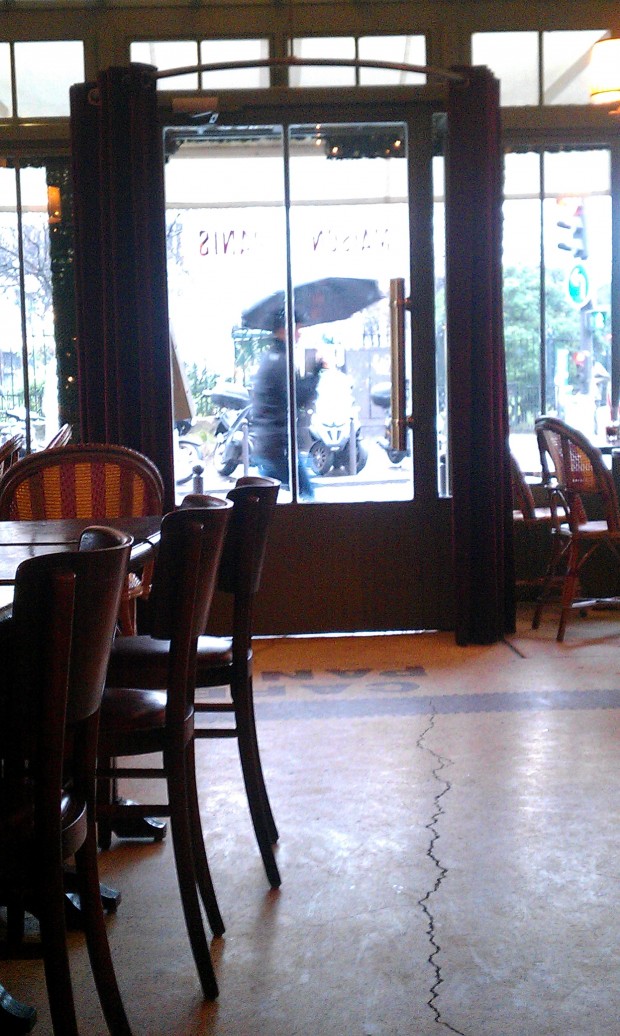 My husband sent me to Paris for my 40th birthday. When I tell people about it, they say “Oh that must have been so romantic for you two.” They look either disappointed or surprised when I say “Oh, I went alone. And it was really beyond perfect.” And that’s nothing against him, because my husband is beyond perfect. But because of his perfection, he understands that I really like going to Paris by myself. There’s nothing better than setting your own schedule, following your own interests, getting lost — and then found — in that beautiful city.

I posted the above picture because it reminded me of the last full day of this particular trip. I had spent the day walking through the rain, stopping here and there to pick up a few things I could bring back home with me to the States. I ducked into this cafe at the end of my walk to dry off and have a drink. But as I sat there and really settled in, I lost myself in watching all the people walk through or past this front door. It was pretty fun, holding court at that spot and (I’ll admit) eavesdropping on the people around me and watching them come and go. When I asked for the bill, the waiter brought me newspapers and another drink. I told him he misunderstood me. He said that no, he really didn’t. “You look like you’re enjoying yourself. Stay longer,” he told me.

And that afternoon was one of the best gifts I’ve ever been given, right up there with my daughter, this wonderful birthday jaunt and so much more.

That’s why I enjoyed Stephanie Rosenbloom’s “Solo in Paris” article in yesterday’s Sunday New York Times Travel section. My husband likes to joke about the way I take a lot of pictures of the green park chairs in the Jardin du Luxembourg (“You really like those chairs, don’t you?” he smirks), so it was nice to see that Rosenbloom’s story featured them too. And there were great touches throughout the piece about lingering over cold, briny oysters and white wine, and spending a luxe evening at the Palais Garnier. More than anything, she captured the feeling you get after staying in Paris for an extended period of time:

Could I bring back with me the feeling that I had cultivated here?

At my feet, two men with a wheelbarrow were tending to the tulips. I saw a shadow of myself on the dirt path, and of the buds on delicate branches above me, on the verge of opening. I looked down at my oxfords, covered in a fine layer of dust.

Whether it’s dust on your shoes or (for me) yellowed chestnut tree leaves tucked into the pages of a journal, it’s the little things that make a solo trip to the City of Light a must and why I’ll book another one the first chance I get.

I’ll end on this note, another one of those special Paris moments I’ve had while wandering around last year: