Linda Ronstadt’s “When Will I Be Loved?” makes me think of my mother, who in the late 1970s used to blast this song in her pale blue Volkswagen Beetle. She, my sister and I would sing it at the top of our lungs. For Mom, it was a recent divorcee’s anthem, a hard-rocking lament that allowed her to belt out “I’ve been cheated…been mistreated…when will I be loved?” For my sister and me, it was just an opportunity to be loud in the backseat. We wouldn’t know anything about being cheated or mistreated…until, you know, at least our late teens. 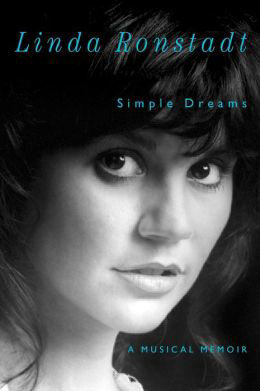 Songs like these were the soundtrack of my youth, which is why I downloaded Ronstadt’s new memoir Simple Dreams onto my Kindle last week and began devouring it in the carpool line outside of my daughter’s school. So far, the book has gotten a lot of attention due to Ronstadt’s recent revelation that she “can’t sing a note” because she was diagnosed with Parkinson’s Disease. In some circles, the memoir has also been critically panned for the things it did not reveal (i.e. details about drug use, her relationships with high profile men such as California governor Jerry Brown and film director George Lucas and her Parkinson’s diagnosis, which happened after the book went to press). I look at it as one of those bittersweet songs she sang, marked more for its simple beauty than for any bells and whistles an industry focus group may have wanted to inflict on it.

People sing, she writes, “to complain of how grievously they have been wronged, and how to avoid it in the future. They sing to help themselves execute a job of work. They sing so that subsequent generations won’t forget what the current generation endured, or dreamed or delighted in.”

Now that Linda Ronstadt can’t sing, this book is a reminder of the singular voice she had in rock-n-roll and her commitment to pursuing her heart’s desire, even when it didn’t seem to make commercial sense to her record label. For example, who could have known her three-album collaboration with bandleader Nelson Riddle would be the success that it was, or that her album of traditional Mariachi music would be such a global hit?

One of my favorite parts of the book was her admission that she felt Emmylou Harris was a far better singer than she was. Ronstadt writes that if she had allowed herself to become jealous of Harris, “it would be painful to listen to her, and I would deny myself the pleasure of it. If I simply surrendered to loving what she did, I could take my rightful place among the other drooling Emmylou fans, and then maybe, just maybe, I might be able to sing with her.” Ronstadt surrendered and she and Harris not only collaborated on a couple of albums, but became great friends too.

Ronstadt concludes: “People ask me why my career consisted of such rampant eclecticism, and why I didn’t simply stick to one type of music. The answer is that when I admire something tremendously, it is difficult not to try to emulate it . . . The only rule I imposed on myself, consciously or unconsciously, was to not try singing something that I hadn’t heard in the family living room before the age of ten. If I hadn’t heard it by then, I couldn’t attempt it with even a shred of authenticity. At the time, struggling with so many different kinds of music seemed like a complicated fantasty, but from the vantage point of my sixty-seven years, I see it was only a simple dream.”

In The Pleasure Groove 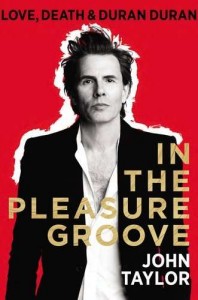 Nigel John Taylor grew up as a shy only child in working class Birmingham, England. It was the 1960s. His father harbored deep, dark secrets from World War II and poured his heart into working on his car. His mother, who couldn’t drive at all, walked her bespectacled lad to church five days a week. That self-same lad was not a jock, not cool and not sure about what he wanted to be when he grew up.

Then the seventies came. When Nigel saw British pop band Roxy Music on television, it was his moon landing. By the end of that decade, he had a best friend named Nick Bates (later Nick Rhodes) who shared his love of music and dream of starting a band. Together they would form Duran Duran, a pop-funk-new wave quintet named after the villain in the futuristic 1968 film “Barbarella.” The band — consisting of keyboardist Rhodes, frontman Simon Le Bon, drummer Roger Taylor, guitarist Andy Taylor and bassist Nigel (who was going by the more rock-n-roll “John” by then) — became the biggest band of the 1980s. Their music was catchy, their videos were decadent, their looks were pin-up boy fabulous.

They made a lot of teenaged girls scream.

I was one of those girls.

Taylor’s much-anticipated memoir In the Pleasure Groove: Love, Death and Duran Duran came out this Tuesday and I finished it in less than a day. The story, co-written with freelance writer Tom Sykes, is an engaging look at Taylor’s extraordinarily blessed life, which was rooted in the Catholic Church, then the pop music and new wave fashion of the 1970s before rock-n-roll superstardom took him on a wild ride around the globe. In some respects, the story is a conventional “nothing could have prepared me for this” tale, one full of screaming teens rifling through his trash, lines of coke snorted through rolled-up $100 bills, more apartments than he could afford and eventual disillusionment with the business aspects of the band that made him a such a fixture on MTV in the early 1980s. But in other respects, it’s a wonderful look at Taylor’s life, the musical and fashion influences that shaped Duran Duran, the creative opportunities that unfolded because of Duran’s success (i.e. the Bond theme “A View To A Kill,” side projects such as Arcadia and Power Station and involvement in Bob Geldof’s Live Aid), and Taylor’s rocky journey away from addiction. His is a redemptive story, which ends with a stronger and better Duran Duran and a healthier, more grounded Taylor who is able to balance the demands of fame and family life.

And Taylor’s book couldn’t have been a better read.

To close, here’s Duran Duran’s Hyde Park performance from the London Olympics. What better way to show off J.T.’s bass magic than “Rio”: