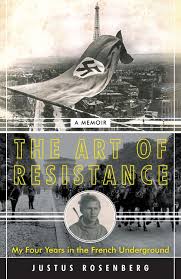 I’ll be migrating most of my resilience-based writing over to my new Substack account. I hope you’ll follow me there and subscribe if you like what you see. So far, an attorney, a flamenco dancer and a hairstylist have told me this idea is just what the doctor ordered. So maybe I’m onto something. Or maybe I just launched the set up for one of those “a (insert thing here) walks into a bar” jokes. I hope not.

I spent a week in Little Rock, Arkansas last July, working with David Montague on the book we’re doing about his mother Raye. Raye was a Hidden Figure of the U.S. Navy, known for being the first person to design a ship with a computer. But she was also a well-known, and beloved speaker to all manner of groups about engineering, doing well in school, and her truly remarkable life.

David and I spent part of that week holed up in his office at the University of Arkansas Little Rock talking and going through some of his mother’s papers, photos, and personal effects. As we shuffled through folders and photo albums, multiple copies of the following quote from Lewis Carroll’s Alice’s Adventures in Wonderland fluttered to the floor:

“That depends a good deal on where you want to get to,” said the Cat.

“Then it doesn’t matter which way you go,” said the Cat.

“—so long as I get SOMEWHERE,” Alice added as an explanation.

“Oh you’re sure to do that,” said the Cat, “if only you walk long enough.”

Some people walk and walk and walk in life, only to go in circles and ultimately nowhere at all. Sometimes it’s because they haven’t had enough guidance and support. Sometimes it’s because they’ve simply quit because the effort felt too daunting. Raye Montague, from a very early age, had an idea of the direction she wanted to walk – engineering – and didn’t stop walking until she reached her destination. Along the way she faced her share of trials and tribulations, but she never viewed them as a roadblock. She saw them as challenges that she needed to overcome so that she could keep going, achieving, and ultimately bringing others along with her on her journey. Yes, she was an engineer in the male-dominated Navy, and it was inspiring that she was able to achieve all that she did during her career. But for me, engineering is not the entire story.

What fascinated me even more than the artform Raye learned to master on the job was her unbelievable resilience in the face of all manner of obstacles and odds that weren’t necessarily in her favor. She lived a life aware of these factors, but undaunted by them as she pressed ahead and onward.

Raye’s life is a fabulous case study about what it takes to overcome challenges, bounce back from failures and heartbreaks, and press forward…somewhere…even in hard times. David and I are looking forward to introducing his mother to you in the not-too-distant future. In the meantime, I’ll be sharing some stories and studies about resilience — what it is, why we need it, how we develop it, and more. The World Health Organization has made resilience a top priority in 2020, and researchers are finding that it’s an increasingly important factor in our health and wellness.

As a profile writer, it makes a lot of sense for me to share people’s stories about bouncing back from hardship. If you have a story about something you’ve overcome and details on how you did it, I’d love to talk to you and perhaps feature you here. In the meantime, stay tuned as I start sharing what I find about this topic. The goal is to be as helpful as possible, but also to engage people in a conversation about a subject that might help us all in this complicated time.