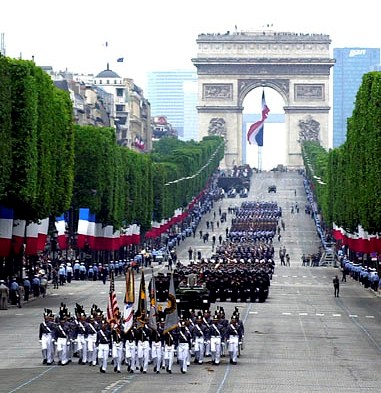 Today is Bastille Day, the French equivalent of our July 4. Here are a few interesting reads and things about it from around the web:

From Deceptive Cadence, NPR Classical’s blog, here’s a quiz about the French national anthem, known as ‘La Marseillaise.’ I scored six out of six on it. But then again, I am just the type of person whose ears perk up and eyes get misty every time this tune is played.  For a wonderful old recording of the song, visit Gallica.fr, the web site of the Bibliotheque Nationale, for this treat from 1908.

From USA Today, an explainer about why Americans should care about France’s fete nationale.

From France24.com, an interview with Christophe Bertonneau, the mastermind of this year’s breathtaking fireworks display, which was fired straight from the Eiffel Tower. If you can get your hands on YouTube video of this spectacle, which commemorated the 100th anniversary of World War I, you won’t regret it.

From The New Yorker’s News Desk, an item about this annual military display and the struggle to acknowledge contributions from colonial troops from countries like Algeria. The Christian Science Monitor reports that for the first time ever, three Algerian vets were invited to take part in the parade. But it also gives a good primer on the complicated relationship between the two countries, which has existed since the early nineteenth century.

From cbsnews.com, a slideshow about the celebration.

From The New York Times’ T Magazine Blog, a timely ode to le grand aioli complete with a recipe.

Did you read anything about Bastille Day that you found interesting? If so, what was it? And if you have any questions about Paris, Bastille Day, or France in general, please don’t hesitate to ask me in comments.