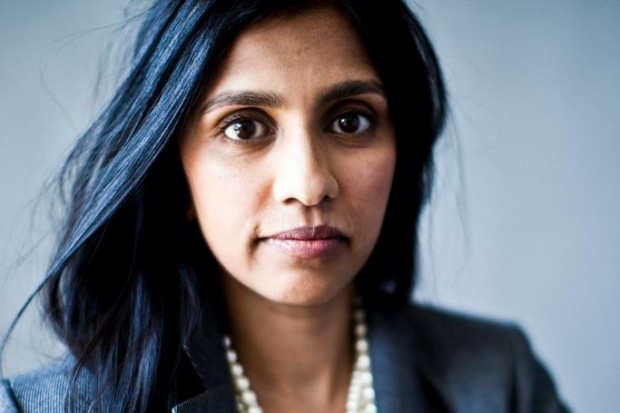 The typical stock images of women have been stereotypes. There’s the serious, bespectacled businesswoman in a suit, the smiling mother pouring her children milk, or the frazzled, have-it-all mom in a suit who has a cell phone in one hand and a baby in the other. But there’s rarely anything beyond those extremes in advertisements and magazines.

Facebook executive and Lean In author Sheryl Sandberg thinks this is hurting women and today she’ll announce a partnership with Getty Images to present a collection of stock pictures that present women and families in more empowering ways. Called the Lean In Collection, the photos include female surgeons, hunters and soldiers, as well as skateboarding girls and hair-braiding dads.

“When we see images of women and girls and men, they often fall into the stereotypes that we’re trying to overcome, and you can’t be what you can’t see.”

According to today’s NYT story:

The partnership comes during a renewed national conversation about women and work, spurred in part by the success of Ms. Sandberg’s book, “Lean In: Women, Work and the Will to Lead,” and Hillary Rodham Clinton’s possible presidential campaign. Its message has the potential to reach a wide area of society, through Getty’s 2.4 million customers who pull from its library of 150 million images.

There is an appetite for the images: The three most-searched terms in Getty’s image database are “women,” “business” and “family.”

“One of the quickest ways to make people think differently about something is to change the visuals around it,” said Cindy Gallop, who started the United States branch of Bartle Bogle Hegarty, the advertising agency. “The thing about these images is they work on an unconscious level to reinforce what people think people should be like.”

The partnership is a way for Lean In to broaden its reach after criticism that Ms. Sandberg’s advice is relevant only to women in corporate America and that she places the burden of breaking through stereotypes on individual women instead of on workplaces and society.

A portion of the proceeds from sales of these images will go toward Getty grants for images showing female empowerment and toward the mission of LeanIn.org, a source of inspiration and empowerment for women seeking to fulfill their ambitions.

What sort of images would you like to see in this collection? Do you think visuals are enough to change the way people view women and family? Why or why not? And in what sort of ways do you think that groups like LeanIn.org can or should support women?