You know how I love to support independent bookstores, especially those owned and operated by women. Yesterday, Ms. Garbo Hearne of Pyramid Art, Books and Custom Framing hosted me and David for a HUGE virtual book talk at her Little Rock-based store. The event was also hosted by the Pine Bluff and Little Rock chapters of the Links, Inc. and the Beta Pi Omega chapter of Alpha Kappa Alpha sorority, two organizations that were dear to Raye Montague throughout her life. David and I have truly enjoyed connecting with audiences about his mother, but the event yesterday felt a little extra special because many of the women in the audience knew Raye in some fashion, and mentioned that the segment we read from the book sounded so much like something she’d say, and/or seemed like a very Raye thing to do. I can’t speak for David, but I can say that feedback like this, from people who were so close to his mother, means the world, because it helps me see how on target we were as we depicted her life in words. I want those who didn’t know her to feel like they did as they read this book, and I want those who knew her (as these women did) to feel her in the room with them all over again.

Ms. Hearne is on the talent committee for the Six Bridges Book Festival and announced yesterday that David and I would be speaking this fall at the event, which will be a mix of Zoom and in-person talks. What blew me away is that she challenged all the women on the call to become ambassadors for Overnight Code, telling everyone they know about the book between now and the start of the festival so that Raye Montague will be hidden no more, especially in her home state. David and I are so grateful to Ms. Hearne, the Links, Inc., and Alpha Kappa Alpha for their support of his mother’s story and continue to be humbled by the support and feedback we are getting from people who have read the book. Please let us know what you think about Overnight Code on Amazon, Goodreads, or even by email. David and I love hearing from you!

Speaking of David, he was the subject of a great and massive feature by Sean Clancy of the Arkansas Democrat-Gazette. We’re grateful to Sean for taking the time and care to write such a great piece, and for illustrating that the apple didn’t fall far from the tree, so to speak. As I’ve gotten to know David over the past couple of years, I’m often impressed by the things he has done in his own life, and would be willing to bet he’ll be talking about it in his own book before too long.

To conclude: I’ve been thinking about mentors lately, because Raye had some tremendous ones in her life. Who were your mentors and why? Would you care to share some stories about how they helped you become who you are today? I’d love to write about mentors for a coming post, so I hope to hear from you soon! 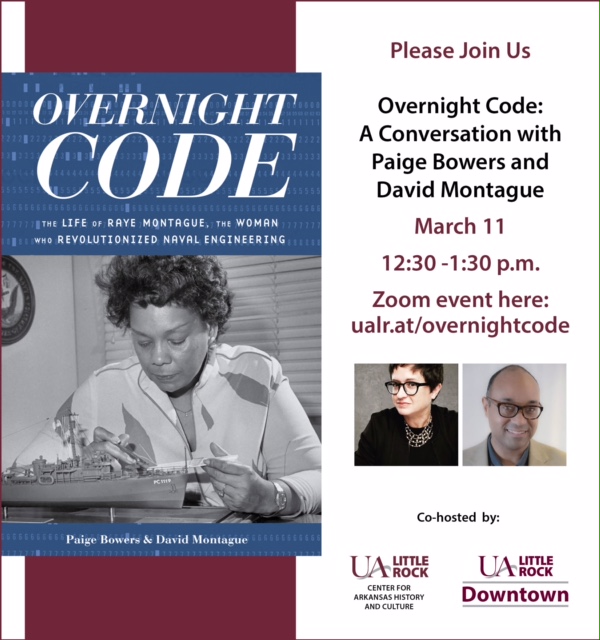 The University of Arkansas at Little Rock will host a virtual conversation with authors David Montague and Paige Bowers to discuss their new book on the life and legacy of the U.S. Navy’s ‘Hidden Figure’ Raye Montague.

The event, “Overnight Code: A Conversation with Paige Bowers and David Montague,” will take place from 12:30-1:30 p.m. Thursday, March 11. Donna Terrell, the award-winning anchor of FOX16 News since 2004, will moderate the conversation.

“It is a privilege for the UA Little Rock Downtown Center and the Center for Arkansas History and Culture to work with David Montague and Paige Bowers to bring the extraordinary life of Raye Montague to our community through their discussion and the rich assortment of archival material that her family so kindly gifted to the university,” said Dr. Deborah Baldwin, associate provost of collections and archives at UA Little Rock. “Raye Montague’s story is an inspiration to all of us and a legacy to be protected.”

The book tells the story of Montague’s mother, Dr. Raye Montague, an internationally registered professional engineer with the U.S. Navy who is credited with creating the first computer-generated rough draft of a U.S. naval ship.

“We are grateful to UA Little Rock for hosting us in what promises to be a very special book talk,” David Montague and Paige Bowers said. “Not only will we be able to discuss the narrative arc of Raye Montague’s remarkable life, but we will be able to further illuminate it with her personal artifacts that are being lovingly preserved at the Center for Arkansas History and Culture. Archives like these are vitally important to the community at large, giving us tangible reminders of who we are and what we can become. Raye’s collection there is perfect proof of that.”

The event is free and open to the public and can be viewed via Zoom at ualr.at/overnightcode.

I spent a week in Little Rock, Arkansas last July, working with David Montague on the book we’re doing about his mother Raye. Raye was a Hidden Figure of the U.S. Navy, known for being the first person to design a ship with a computer. But she was also a well-known, and beloved speaker to all manner of groups about engineering, doing well in school, and her truly remarkable life.

David and I spent part of that week holed up in his office at the University of Arkansas Little Rock talking and going through some of his mother’s papers, photos, and personal effects. As we shuffled through folders and photo albums, multiple copies of the following quote from Lewis Carroll’s Alice’s Adventures in Wonderland fluttered to the floor:

“That depends a good deal on where you want to get to,” said the Cat.

“Then it doesn’t matter which way you go,” said the Cat.

“—so long as I get SOMEWHERE,” Alice added as an explanation.

“Oh you’re sure to do that,” said the Cat, “if only you walk long enough.”

Some people walk and walk and walk in life, only to go in circles and ultimately nowhere at all. Sometimes it’s because they haven’t had enough guidance and support. Sometimes it’s because they’ve simply quit because the effort felt too daunting. Raye Montague, from a very early age, had an idea of the direction she wanted to walk – engineering – and didn’t stop walking until she reached her destination. Along the way she faced her share of trials and tribulations, but she never viewed them as a roadblock. She saw them as challenges that she needed to overcome so that she could keep going, achieving, and ultimately bringing others along with her on her journey. Yes, she was an engineer in the male-dominated Navy, and it was inspiring that she was able to achieve all that she did during her career. But for me, engineering is not the entire story.

What fascinated me even more than the artform Raye learned to master on the job was her unbelievable resilience in the face of all manner of obstacles and odds that weren’t necessarily in her favor. She lived a life aware of these factors, but undaunted by them as she pressed ahead and onward.

Raye’s life is a fabulous case study about what it takes to overcome challenges, bounce back from failures and heartbreaks, and press forward…somewhere…even in hard times. David and I are looking forward to introducing his mother to you in the not-too-distant future. In the meantime, I’ll be sharing some stories and studies here from time to time about resilience — what it is, why we need it, how we develop it, and more. The World Health Organization has made resilience a top priority in 2020, and researchers are finding that it’s an increasingly important factor in our health and wellness. This is some writing I originally trotted out on Substack, but I found it difficult to keep it going at that spot, primarily because it was one more place to log into and maintain. Still, I wanted to keep looking at the idea from time to time, so I decided it would be best to do it here.

Let me know if you have any questions or stories you’d like to see on the matter. In  the meantime, I’ll keep poking around and share anything interesting I find.

When I was in the midst of moving back to Atlanta, my agent contacted me about a story that really needed to be told. It was about an African-American woman named Raye Montague, who engineered her way out of the Jim Crow South to become the first person to draft a Naval warship design by computer. The idea was that I’d complete a proposal (quickly), and if it sold, help her get her memories down (again quickly; she was 83) so we could get what promises to be a marvelous and truly inspirational book about a Hidden Figure out to market. Over the course of the summer and into fall, I’ve gotten to know and truly love Raye and her son David, as I started working with them to create what was originally intended to be her memoir.

About a month ago, Raye fell ill and went into hospice. She died October 10, and after months of talking to her and getting to know her, my heart absolutely broke. Her son’s heart broke. So many people whose lives she touched…their hearts broke. Raye was brilliant, strong, inspirational and so goddamn funny. She was a great storyteller, which was a delight for someone like me. Now, her son David and I will be working together to co-author her biography, which is tentatively titled KICK LIKE THE DEVIL. It’ll be published by Chicago Review Press, just like my first book was, and I think I can safely that I and David – my friend David – are chomping at the bit to share the life of this amazing woman with you. Stay tuned…and thank you.