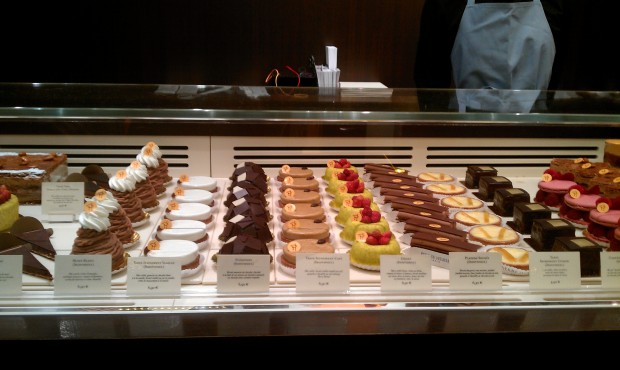 A dose of sweetness at Pierre Herme.

This time last year I was returning from a research trip in Paris. I spent two weeks there by myself, both sifting through archival material about an architect who captured my imagination and indulging in goodies like the ones pictured above. In my waning moments in the City of Light, I told myself that if I did one thing in 2013, it would be to turn this research interest of mine into a book proposal that would capture a literary agent’s imagination too. By September 11 of last year, I did just that and I am beyond grateful to be represented by Jane Dystel of Dystel and Goderich Literary Management. I spent the latter part of last year refining my book proposal to her and her fabulous business partner Miriam Goderich’s standards. Now that I’ve completed that milestone, I have a new goal: If I do one thing in 2014, it’s to become a published author.

Yes, I did say “goal” and not “resolution.”  Jane wrote about resolution-setting this week on DGLM’s blog, and like her I tend to set goals, rather than resolutions that seem made to be broken. It’s because I prefer to work toward something in my own little imperfect way, rather than resolve to do something, fall short of my resolve and then feel like I’ve bungled everything in my efforts to get from point A to point B.

All the same, it’s the beginning of the year, and beginnings are a good time to reflect on what you’ve done before and tweak where necessary. This article that Jane shared has a great list of things worth working towards, for better or for worse. Better sleep and less smartphone are my favorites on this list, along with supporting local businesses and donating to charity (my pick: The National Multiple Sclerosis Society because my sister was diagnosed with this a year ago).

1. Reacquainting myself with my yoga practice. My mat spent more time in the closet than under my feet at the end of 2013 and I need to change that for my own sake. Shame on me.

2. Improving my public speaking skills. I probably won’t be the first (or last) writer to say that I get a little nervous speaking in front of people. But I’m steadily working toward changing that. Last fall I spoke to an elementary school class about writing, and this spring I’ll teach my first class at LSU. Other speaking engagements are on the horizon and it is my hope that after each one I’ll get better and more confident in front of crowds.

3. Cultivating patience. I have a history of not waiting well, but I’m working on that. Although I made some strides in 2013, we can always stand to improve ourselves, non?

4. Sharing more here about writing, publishing, entrepreneurship and the latest and greatest reads. Plus, keeping up the eclectic and random stuff. Blogs and social media always seem to be a work in progress, something that shifts shape depending on a writer’s interests. This year, I’d like to open things up to readers who have questions about writing or publishing, share interviews with interesting folks and bring activity from my Goodreads feed into longer, more thought-out posts. If there’s something you’d like to see covered here, please don’t hesitate to drop me a line via my contact page, or shoot me a tweet on Twitter. You can follow me @paigebowers.

What goals have you set for 2014? Please share them in comments and let me know how you’re doing with those goals. And, if you’re not setting goals or resolutions, let me know why you don’t.