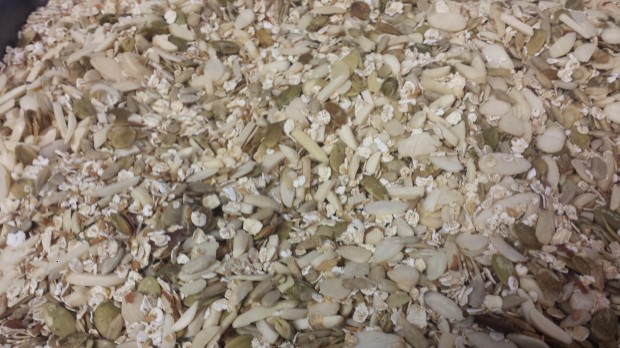 Confession: I have been buying oats, nuts, seeds and dried fruit to excess this past year. Of all the fatal flaws a person could have, this is probably not the worst. And yet, my husband has been dropping gentle hints about how maybe I can find something to make with all this stuff…so it will, you know, disappear from the pantry, and (in my mind) make room for more of it, or (in his mind) make room for the homemade beer he is forced to ferment in his office closet.

But yes, I have a seeds/nuts/oats/dried fruit problem. It began earlier this year when I had romantic notions about making healthier snacks for the household. It ended (sort of) when I blew up my food processor trying to make some sort of raw candy bar out of cashews, chocolate chips, coconut and I-forget-what-else.

“Is that smoke coming out of the food processor?” my nine year old asked.

“No,” I told her, before sniffing the air and realizing that yes, it was indeed smoke…and…oops…my food processor was no longer working.

So much for those candy bars. 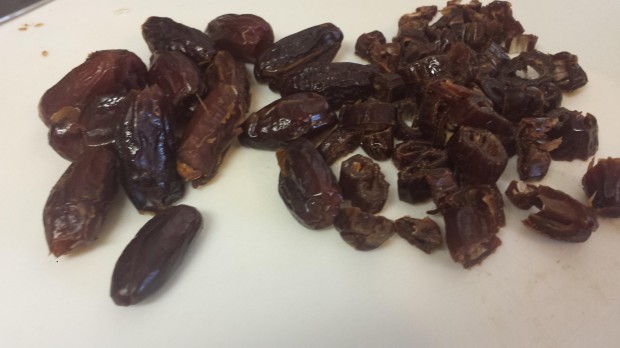 The dream died there, if only for an instant. Ever since that ill-fated evening, I’ve been eating oatmeal and dried fruit and/or nuts and honey for breakfast, which means the unrelenting need to have these products on hand has not ceased (in my mind alone). But today, I decided to go back to this healthy snack idea. I decided to make chewy granola bars. I found a great David Lebovitz recipe on his website and adapted it a little bit to reflect the ridiculous amount of seeds and almonds (slivered and otherwise) that I have in the pantry. After toasting the oats and such and leaving them out to cool, I added dark chocolate chips and chopped dates to the mixture just to keep the flavor simple. 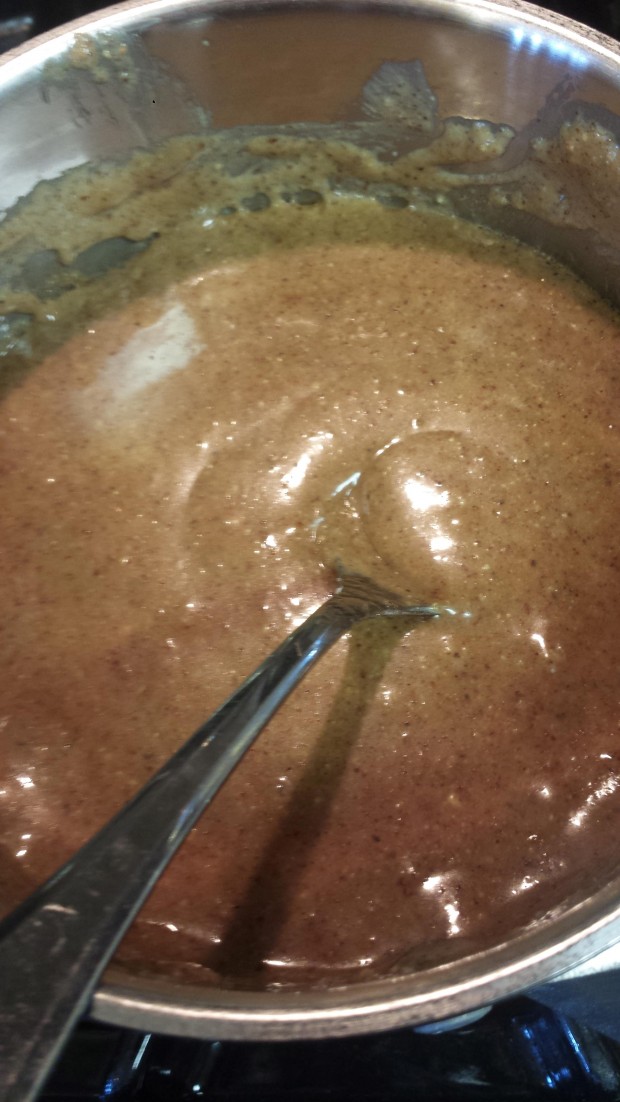 Then, I combined almond butter with raw honey and a pinch of salt to create the oozy, chewy sauce that binds it all together. 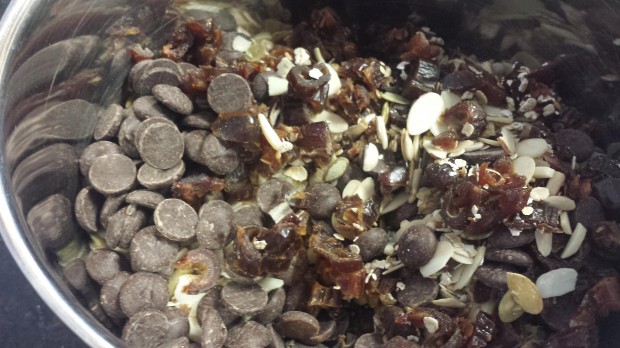 I added the sauce to the contents of the picture above, mixing it in with my hands to get it fully incorporated. After that, I smoothed the mixture into a parchment-lined baking pan. This is what it looked like: 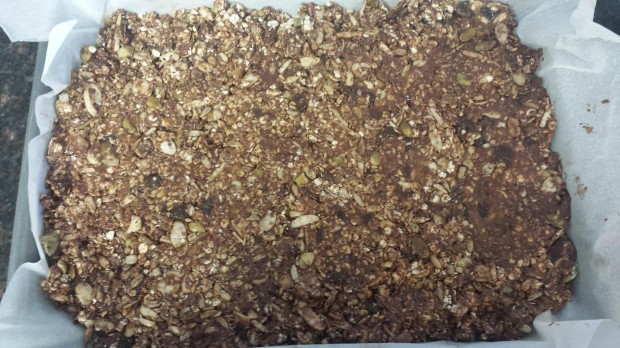 I froze this for thirty minutes, then took it out and sliced it into bars. Mine didn’t look pastry chef perfect, but they tasted fantastic. 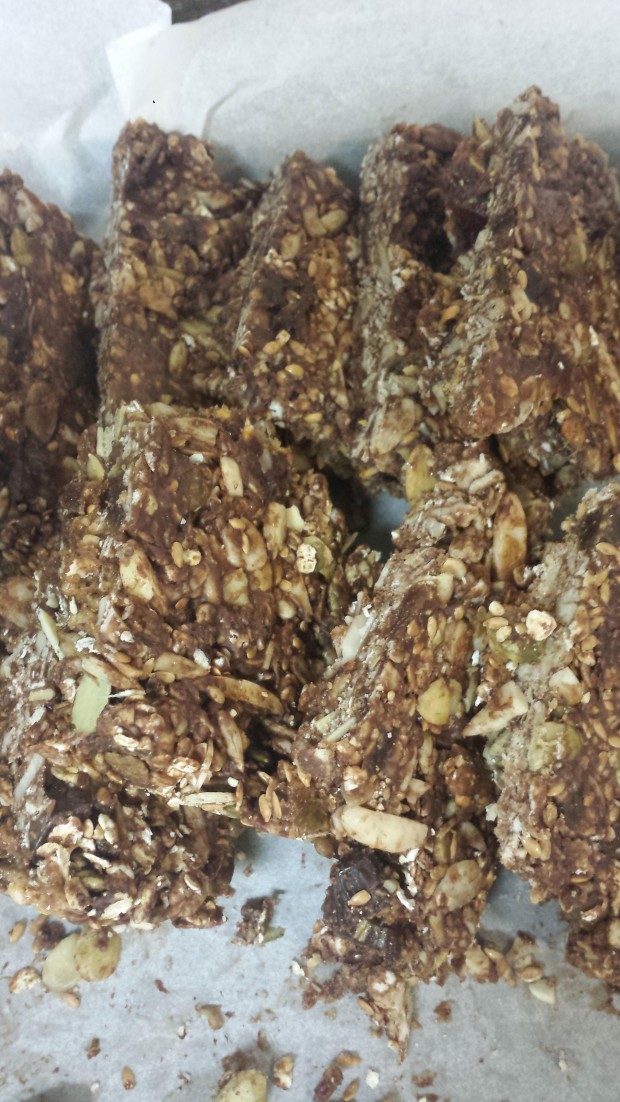 The Heffalump in the Room 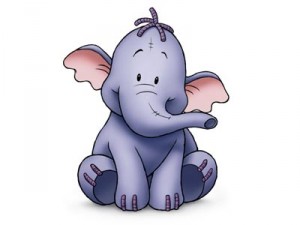 When A.A. Milne first wrote about heffalumps —  which are elephants in little kid speak — they existed as a figment of Winnie-the-Pooh’s imagination. All the same, Pooh was determined to capture these pachyderms that stomped through his dreams. In the end, Pooh snagged himself and his nervous little buddy Piglet in a trap that he set to catch one of these critters.

I bring up heffalumps because some friends and former colleagues have told me I really should write about what it’s like to be an older person in graduate school. That is the heffalump in the room, so to speak. Honestly, I haven’t done it, because I could not see why anyone would find my impressions of graduate school interesting or the slightest bit entertaining. A lot of times it’s neither of those things. Footnotes? Please. Historiography? Please. Sitting still for three or more hours straight? Please. I also haven’t done it because I felt like my first year of graduate school mainly consisted of battling Heffalumps, Wizzles and Woozles — imaginary monsters that trapped me in my own net.

Now that I know those monsters aren’t there, I laugh a lot more.

I’d say yes and no. I’d say yes because the experience has knocked some cobwebs out of my brain and helped me refine my so-called critical thinking skills. I’ll  never read a book the same way again, because I’ve spent the past year looking at arguments and finding out what’s wrong with them. These skills are useful for a reporter, writer, or really anyone from any walk of life. So that’s good.

Still, a lot of times I ask myself why I did this. A lot of times I count the days until I can go back and do what I love — write full-time for a living. I miss reading well-written books. I don’t know what that’s like anymore.

I miss a lot of things but I know I’m going to come out of this grateful and good. Because I’m determined.

And I’ve had a lot of great people in my corner who have been pulling for me.

Maybe I’ll start telling Student Union cashiers that I actually DO get the employee discount. Or maybe I’ll stop telling professors that no I’m not teaching the next class, I’m learning in it.

But I’ll refrain from beating the next 18-year-old with my walker when he asks “Excuse me, ma’am, can you tell me where Lockett Hall is?”

There’s a certain fun in pointing to a vague “over there” and just letting them meander through a sea of pajama-clad, hormonally-deranged humanity. I guess we come back to school to wade through that sea so we can emerge on the other side, waterlogged but stronger in who we are.