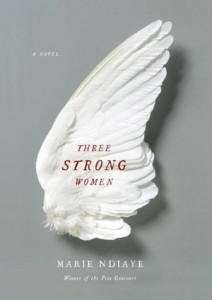 The French Ministry of Immigration in 2009 opened a national discussion on what it meant to be French. The previous year, an estimated 11.8 million immigrants lived within the country’s borders, the bulk of them (around 40 percent) settling in or around Paris. In 2005, two immigrant boys were electrocuted while they hid from police in a power substation. Paris rioted, both about the deaths and the larger issue of how immigrants don’t experience liberte, egalite or fraternite once they arrive in France.

In a country with tough anti-immigration laws, critics believed the 2009 identity debates were more about exclusion than integration. After all, anti-Muslim tirades spilled onto the immigration ministry’s web site as soon as it was opened up to commenters.

Oddly enough, in that same year Marie Ndiaye won the Prix Goncourt for her novel Three Strong Women. Ndiaye, whose mother is French and father is Senegalese, became both the most widely-read author in the country and the most controversial, largely because she called President Nicolas Sarkozy’s anti-immigration policies “monstrous.” In response, a member of the French parliament wrote an open letter that said Goncourt winners should respect national cohesion or remain silent. Fortunately for readers trying to understand the realities of multiracial France, her book has been translated into English, making that silence impossible.

Three Strong Women involves three interconnected — but uneven — tales about women straddling the divide between Africa and Europe. The first is about Norah, 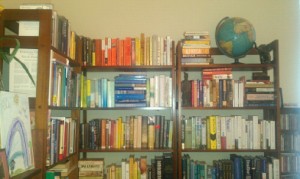 Most of us are still attached to books. I can think of no better content delivery system. But it’s more than that: Books have soul. And they have lasted a long time. That, too, says something. I believe in change, and if I have to read a book off the head of a pin, I will, so long as it’s a good book and a decent pin.

— Betsy Lerner “The Forest for the Trees: An Editor’s Advice to Writers”

These are my bookshelves.

At least some of them.

Clearly I like to read. Memoirs, history, fiction, poetry, you name it. My tired old eyes will give almost anything a try.

I signed up for Goodreads this past week, in hopes of getting — and giving — recommendations for great books. Meet me there by clicking on “Paige’s Bookshelf,” located on the right side of this page.  The link will direct you to the Goodreads web site, where you can register and start telling me all the wonderful things you think I should read after I complete my master’s degree.

In the meantime, here is an interesting read from Pop! Tech about the creative ways communities are reaching people with books. From subway-based libraries to temporary reading rooms in urban green spaces, these projects