Scenes from a Book Launch

I’m full of gratitude right now for the people who braved the rain and (in one case) fought through a busted tire to hear me talk about Genevieve de Gaulle last night at Octavia Books, which is one of the loveliest, friendliest places to launch one’s first tome. I got a warm reception, an attentive and engaged audience who knew their World War II history, and the opportunity to break in a new box of Sharpie pens.

The shop gave me a wonderful front-page welcome on their website. 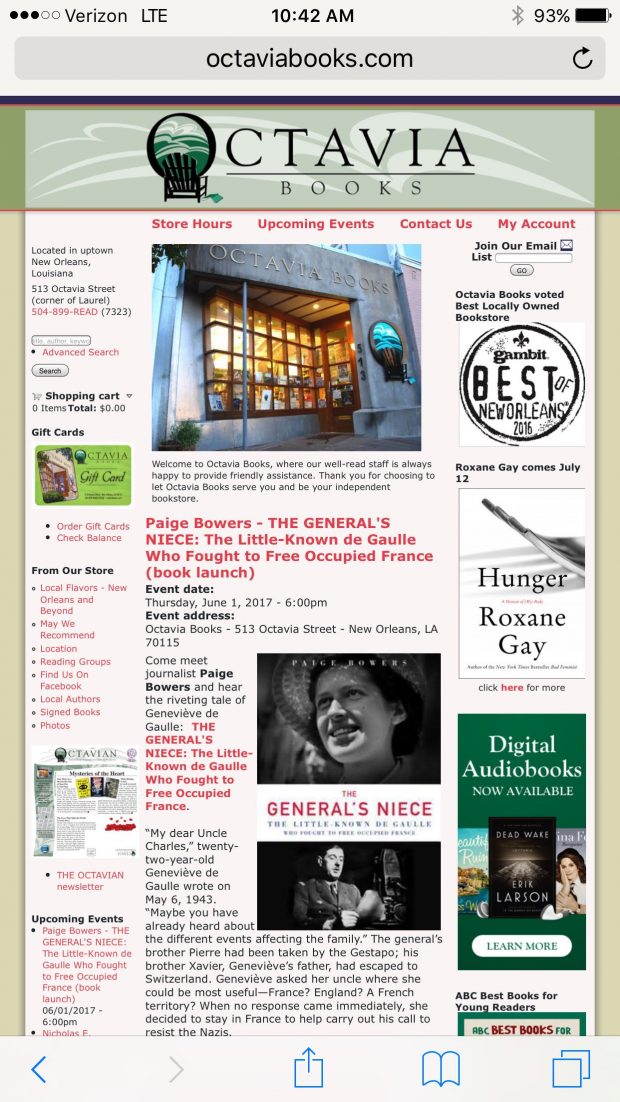 I was able to chat with the audience a bit before giving my book talk. Getting to know a little bit about them and their interests was fun for me, and helpful too, because I could make sure to tailor some of what I was saying to them. 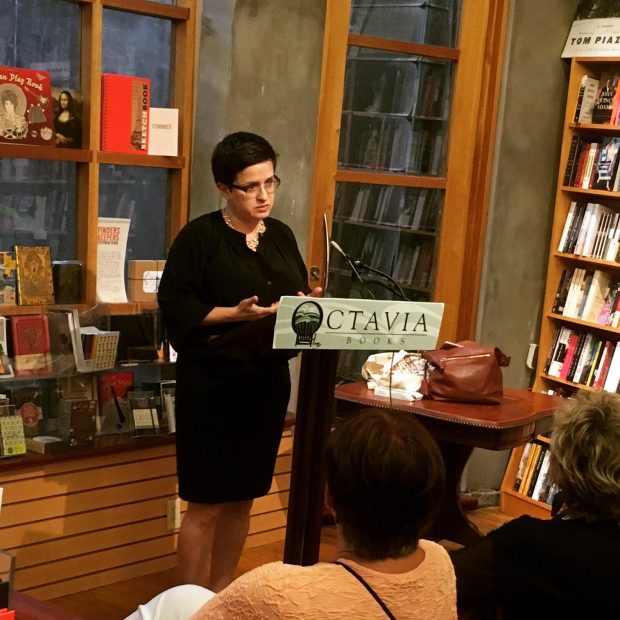 This kind lady right here said she was going to take The General’s Niece off to the beach and read it. I signed that I hoped it kept her good company in her beach chair. 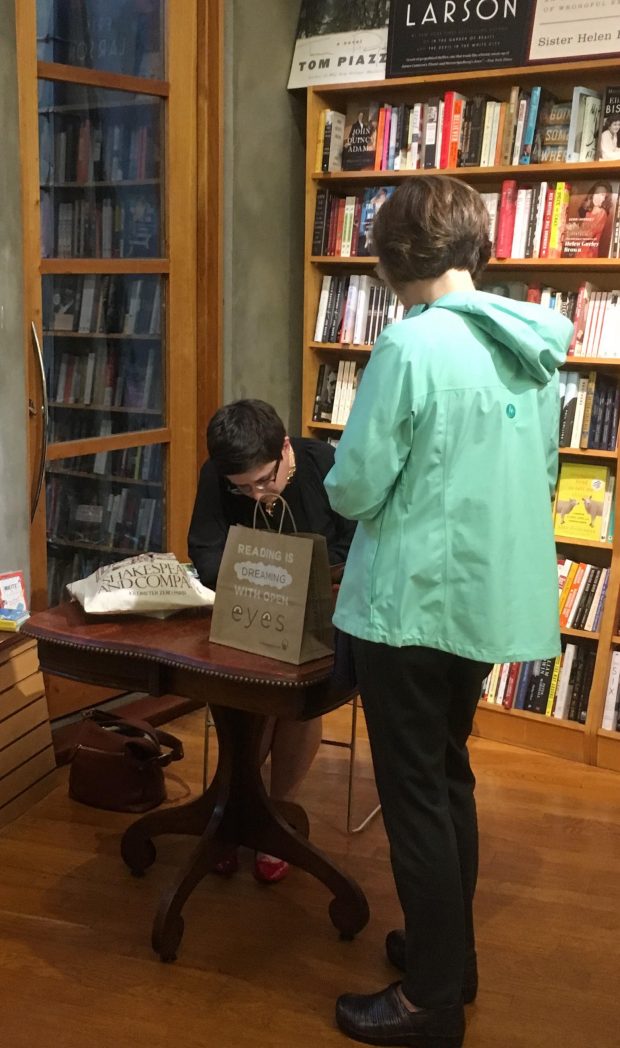 After signing some other books for guests, I signed some more for the store. At Book Expo in New York this week, Genevieve de Gaulle kept Dolly Parton company on a shelf at my publisher’s booth. Here she is sidled up to Ernest Hemingway. 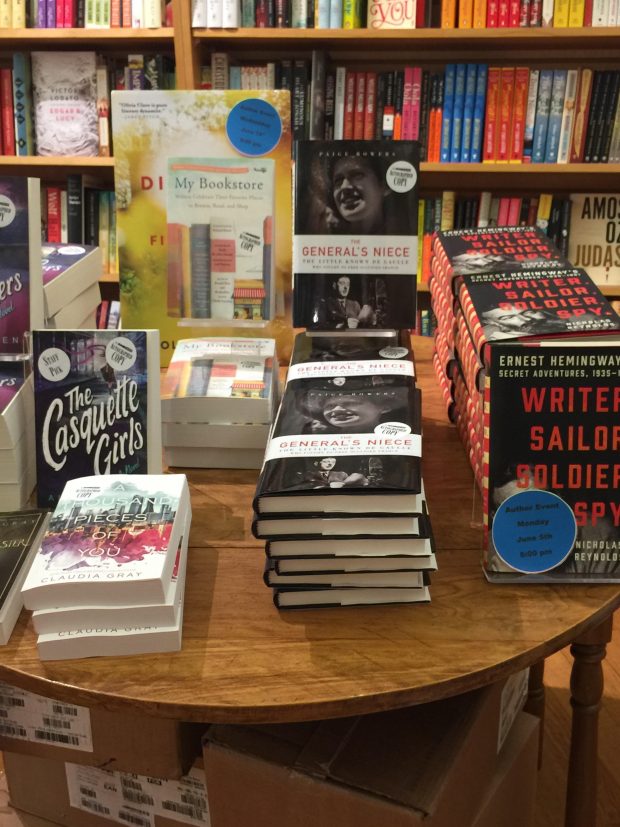 Tonight, I’m off to see the new Wonder Woman film with my daughter and a friend. Then, I’m on to Atlanta for my next talk, which is Monday June 5 at the Carter Presidential Center. Hope to see you there! And thank you for the support!

I spent part of last week in Atlanta, visiting some of my favorite people, places and things. I love that no matter where I go and what I do, I always manage to find a bit of France. This time: It was Napoleon III in all his mustachioed glory. 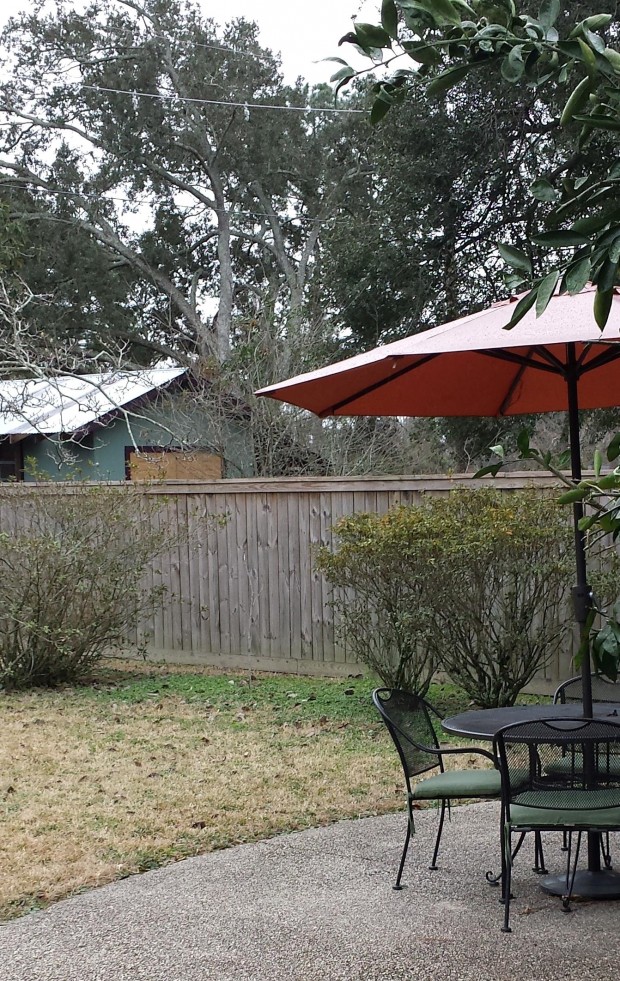 As everyone knows by now, the South had a winter storm that, among other things, dumped a menacing (and I say that in the sarcasm font) 1-3 inches of snow on Atlanta and brought the city to its knees. Children were stranded at school, cars were abandoned on the interstate, commuters were forced to hole up in the aisles of pharmacies and supermarkets because they couldn’t make the soul-punishing commute home. By soul-punishing, I mean it took some people more than 24 hours to do what normally takes about 30 minutes. Much has been written and said this week about that brand of snowmageddon (and the lack of political accountability), so I’m afraid all I have to add is that I still can’t wrap my head around what happened in my old hometown.

My husband was in Atlanta for business, so unfortunately he got caught in the middle of that mess. We were grateful to have him back home yesterday afternoon, so he could enjoy the balmy 50 degree weather and some roast beef po-boys for dinner. Where he had ice and snow and mayhem, we had sleet and cold and dangerously icy streets. School was closed here for three days. Our Yellow Lab Murray didn’t want to be cooped up, but didn’t want to brave the 20-degree weather either. So there was a lot of indoor fetch this week, which was fine because our Murray still hasn’t grown into his meaty boy paws.

Granted, this week’s snow days were not at all like the ones I had when I grew up in the Greater Baltimore area. Those days off involved knee-high snow, epic snowball fights and piping-hot cocoa after hours of outdoor play. This week, the most precipitation I saw was yesterday, when my daughter and her best friend unleashed a blizzard of glitter on my kitchen countertops. Nevertheless, the spirit of snow days — and all days involving inclement weather — remained: You accept the situation and make the most of things until the sun comes out.

The sun came out.

The roads are no longer slick.

Murray only has a little bit of glitter behind his ears now.

School is back in session.

This weekend, the weather should be spring-like, with temperatures in the 70s.

Speaking of making the most of things: I roasted a chicken one night this week and turned the leftovers into a homemade chicken noodle soup, which was perfect for the weather. You’ll need:

* Whatever small pasta noodles you have on hand. I used a mix of elbow macaroni and shells.

* salt and black pepper to taste.

* A few hits of parsley

* Red pepper and celery salt  (optional, but the celery salt really gives it a nice flavor)

Directions: Cook the pasta as directed on the package and drain it. Put the chicken, vegetables and stock together in a pan, before adding about three cups of pasta. Season to taste, then simmer for 30 minutes and serve.

Here is the end result: 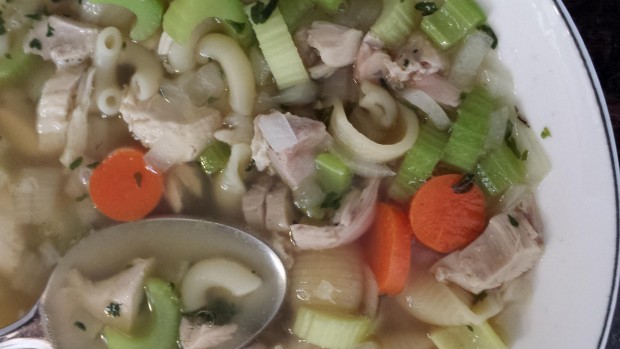