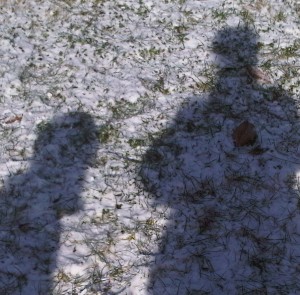 Shadows of mom and kid, freezing on Friday.

My daughter woke up early this past Friday morning and reported that it had snowed in the front and back yards. Spellbound, she looked out of the front window of our house and breathlessly continued her report.

Snow, of course, is in the eyes of the beholder. When you are four years old and have only seen maybe two other snowfalls in your life (one of them decent by Southern standards, the other negligible by anyone’s standards), any snow is a major deal especially if it gets you out of school for the day. However, when you are a boring old bifocal-bound mom, such dustings are a mild annoyance, especially if they are accompanied by bone-chilling cold.

Let’s wait until it warms up a bit after lunch. It is really…REALLY…cold out there.

You have to eat breakfast/bundle up/insert other excuse here before that can happen.

The maternal stalling tactic worked, but only for a little while. An hour later, I was bundled to the hilt in the front yard, trying to start a snowball fight with…virtually nothing. But I started one. Though it didn’t last long (it couldn’t have, what with our resources), it was fun.

Lesson one for the New Year in finding joy in (and with) small things.

Though our great Southern snowstorm was laughable, the cold weather we’ve had here in Atlanta has been no joke, mimicking the fairly decent deep freeze this blog has experienced since last fall. Said blog freeze is a story for another time (and probably a really boring one when you get down to it).  In the meantime, let me make a few cold weather recommendations before the rumored thaw hits sometime later this week:

Mary Karr Karr, a poet and memoirist, is one of my favorite writers. Her third memoir “Lit,” which covers marriage, motherhood, alcoholism recovery and the start of her success as a writer, riveted me all Saturday night and into Sunday morning. As usual, her story is from the heart and poetically written, something so fantastic and spiritual, I sobbed as I gobbled down its final pages. Here, Karr talks on the Harper Books channel about her work:

Now I’m looking for something new to read. Any suggestions?

Resolutions I’m not great at keeping New Year’s resolutions, but am trying to do better. Two I care to discuss, are health-related: I’m taking vitamin supplements now and trying to stick to a regular exercise routine. It’s amazing how sharp you feel when you do that. That feeling alone keeps me coming back to the exercise bike and ripping open a daily vitamin pack. Hopefully I’ll be able to keep it up. What have you resolved to do in 2010 and how are you faring so far?

Hand signals My hands were dry, chapped and painful because of the bitter cold and our home’s constantly running heater. Amy at Aviary Organic Beauty Collective turned me on to Dr. Hauschka Skin Care’s hand cream, which soothed and softened my skin in no time flat!

Comfort food When it’s cold, I like hearty soups, stews and rib-sticking fare (part of the reason I’m going hardcore with the cardio). I’ll be sharing some of those recipes this month. Here’s one of my kid-friendly favorites:

Salt and pepper to taste

Vegetable or olive oil for frying

1. Preheat oven to 400 degrees and then cook the chicken (seasoned with salt and pepper) for 30 minutes (or until golden brown), turning the chicken halfway through the cooking time

2. While chicken is baking, fry bacon in frying pan until crisp, then set aside on plate lined with paper towels

3. In that same pan, melt butter, then add onions and saute them until they are caramelized. Deglaze pan with 1/2 cup water (or less), then add crisp bacon and garlic to mix. Combine the ingredients, then remove from heat and set aside

4. In another pan, deep fry potatoes in oil until they are golden brown. Remove them from pan and season them with salt and pepper.

6. When the chicken is ready, remove it from the oven and cover it with the onion and bacon mixture and crisp fried potatoes, then return it to the oven to cook for another 5-10 minutes.

7. Divide the chicken among plates and finish the dish with parsley.

Here it is! Enjoy! 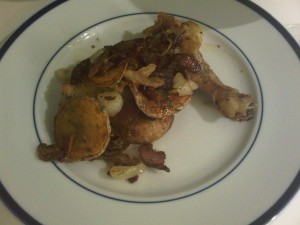