I believe everything cookbook author Patricia Wells says about food and the French because she’s living in Paris and charging $5,000 a head for cooking classes, whereas I am not. Plus she won a James Beard award, plus she thinks competitive shows like Iron Chef are a little too too (Agreed. I say “feh” to all the running and clock-beating attempts; it’s FOOD, so take your time), plus she gave up vegetarianism in order to do what she loves.

So when it came time to delve further into this pumpkin madness, I turned to Wells’ “The Paris Cookbook” in hopes of finding a simple, but good soup recipe. And sure enough, she had one, along with an anecdote about how the French have fallen for Halloween in recent years. “Now pumpkins carved with wonderfully expressive faces can be found piled high at my market on rue Poncelet,” she writes. “A vegetable merchant suggested this simple soup to celebrate what has become an international holiday. This combination of a few ingredients looks and tastes as though you have been working for days on the ultimate pumpkin soup.”

She was not lying. Lord have mercy, this soup was all kinds of good.

Here’s how you make it…

2 lbs. fresh pumpkin cubed (I would imagine about 2 lbs of canned, pureed pumpkin would be fine too)

Variation (per la Wells): You can serve this with very thin slices of blue cow’s milk cheese floating on top. Or you could do what I did and not do that.

At any rate, here it is, a wonderfully simple soup with a velvety texture and subtle sweetness. Enjoy! 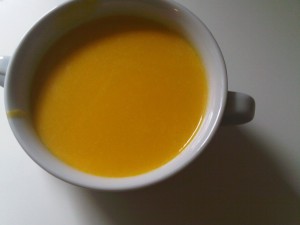 More from this series…

Monday: Breaking down the pumpkin and roasting the flesh and seeds.

Today: An out of this world (and easy) pumpkin soup.

Tomorrow: An exploration of whether I’m sick of pumpkin yet; a recipe for pumpkin chocolate chip cookies.