During the holidays, I’m not usually one for pumpkin pie. When I bake, I make sweet potato cheesecake or chocolate pecan pie at Thanksgiving because I want to keep it as rich and decadent and Southern as possible.

Still, armed with as much pumpkin as I am now, I could not avoid the lure of one of the most traditionally American pies out there. So once I pureed my blue pumpkin, I felt it was time to tackle the venerable pumpkin pie.

These pies date back to the Pilgrims, who discovered pumpkins when they came to the New World. But those first pies, according to various sites like this one , were not pies as we know them today (buttery crust filled with spicy-sweet, pumpkin-y goodness). Rather, they were hollowed-out pumpkins filled with milk, pumpkin flesh, spices and syrup and baked in hot ashes for hours.

But I am not a Pilgrim. I am merely a person with a New York Times Cookbook and a lot of pumpkin on her hands. So I started off as any latter day Pilgrim might, channeling the spirit of Paula Deen to make a sweet pie pastry chock full of butter.

¼ cup of unsalted butter (use Plugra or else)

From there, you move on to the filling…

Here’s what you get… 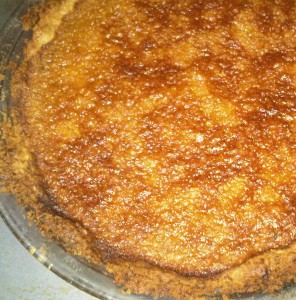 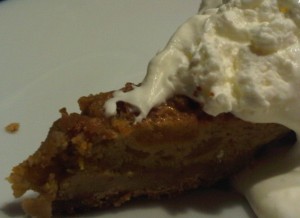 More from this series…

Yesterday: Breaking down the pumpkin and roasting the flesh and seeds.

Tomorrow’s recipe: An out of this world (and easy) pumpkin soup.