Pumpkinpalooza, Day 1: Let Me Break It Down For You 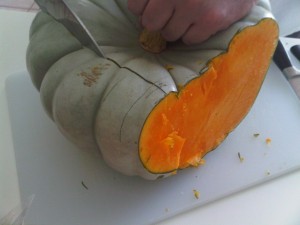 Proof that the first cut is truly the deepest.

When I told Michelle about my blue pumpkin, she, too, wondered whether its inside was as blue as its outside. “We need more blue food,” she told me and later posted that belief as her Facebook status.

Leave it to Michelle to make a grand pronouncement. As a magazine editor, grand pronouncements are her stock in trade.  Me, I just investigate and report back to her so that she can decide what the new black is, as I am often too ill-equipped to make that sort of call.

So yesterday, I decided to get all Mad Scientist on this blue beast, only to learn that a. they are really hard to cut into (which is why you see my husband’s hands in the photo above, doing my dirty work) and b. while their outsides might be blue, their innards are a standard issue peachy-orange.

So, because the Internet is rife with obsessive compulsive behavior, I’d like to take this week to explore the myriad ways you can eat pumpkin. Perhaps Michelle can be inspired by my reporting and find out whether good things come in blue packages, or something like that. 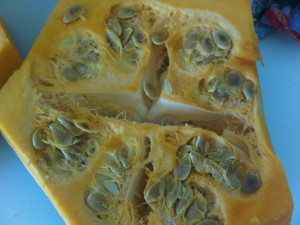 Once Husband cut the pumpkin into pieces, I fished out all the seeds and rinsed them so that I could roast them at 400 degrees in a mixture of olive oil, salt, pepper and assorted herbs (parsley, oregano, thyme, rosemary). 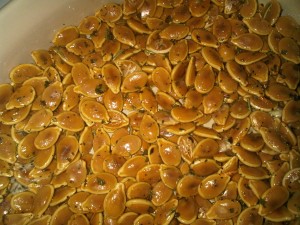 Tasty. So said Hubby, at least. My four-year-old pronounced them “deeesgosting!”

Perhaps she, too, has a future in magazines or whatever their future incarnation may be. 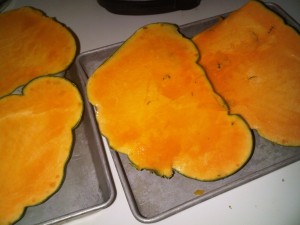 Then I took the hacked up pieces of pumpkin (pictured above) and roasted them for a half-hour or so. I didn’t put anything on the pieces because I’d be using them in things that were both savory and sweet. But when the pumpkin was done roasting, I cut off a piece, diced it, tossed it with olive oil, salt, pepper and thyme and had it for lunch. There was plenty left to puree as you can see from the picture below, which is an estimated 10 cups of the stuff. 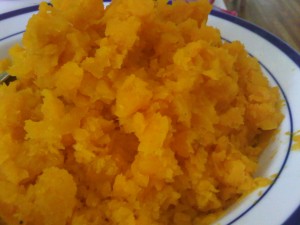 Oof. I predict I will be giving away a lot of pumpkin-related fare between now and Thanksgiving.