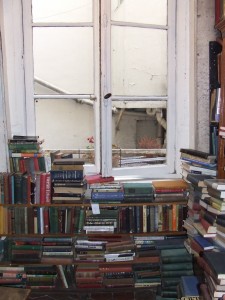 The upstairs library (a.k.a. where I'd like to live forever) at Shakespeare and Co. in Paris.

I went to Paris last fall with my family. On my last day there, my daughter and I heard the novelist Dave Eggers speak at the historic Shakespeare and Company. When I returned from my trip, I wrote a brief post where I said that it was a religious experience to hear Eggers speak in such a storied place and that I was still trying to make sense of it.

Then I went silent, except for a weeklong bout with pumpkin-induced psychosis.

Now I think I’m ready to say a few words.

People have spilled a lot of ink over the death of the news industry and of publishing in general. Jesaka Long wrote yesterday that she stays positive about publishing because of what memoirist and poet Mary Karr believes: if you have an original voice you will get published. I believe that too. But I’d like to add some air to this hope balloon.

Like I said, I heard Dave Eggers speak this past fall. This was no small task, I recall, as I had to physically remove my daughter from the Jardin du Luxembourg in order to do it.

Look at her, the poor kid, just playing her heart out: 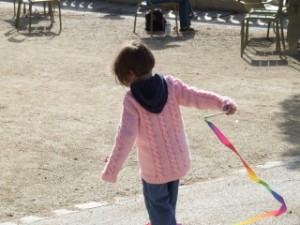 Once again, Mom is no fun.

Fortunately for me, a. the two of us were able to sit in the front row for the talk and b. Eggers began by reading from his then yet-to-be published “Where the Wild Things Are” novel. Hearing Eggers howl as if he were Max was enough to render my daughter awestruck and angelic.

What does this have to do with publishing or what Jesaka wrote? Eggers believes that if you do the work and write the book, that you don’t have to go all platform-happy (by that I mean jumping on the social media train) in order to be a successful author. Like voice, story still matters and books and published materials do too. How deliciously old school of him! Eggers didn’t talk about search engine optimization, he didn’t extol the virtues of Kindle. He did extol the virtues of sitting down with something that you can put back on a bookshelf, or something that inks up your fingers as you nurse that cup of coffee all Sunday morning. So what keeps me motivated and optimistic about publishing, as Jesaka asks? That people who think like Mary Karr and Dave Eggers exist in the midst of all this Twittered gloom and doom.

This concludes the part where I come out as a closeted optimist. If you’d like to add your two cents to this publishing conversation, please do so in comments.

Speaking of death, today marks the first time in 60 years that someone neglected to leave a half bottle of cognac and three red roses on Edgar Allan Poe’s grave in Baltimore. Locals have kept vigil near Poe’s gravesite since 1977, hoping to catch sight of the mysterious fan who left these goodies every anniversary of the writer’s birthday. But when that fan – and his gifts — never materialized this year, one woman was quoted as saying she was so disappointed about the apparent end of the ritual that she wanted to cry.

Let it be known that if and when I actually die, that all two of you readers should leave plates of sole meuniere and bottles of Pouilly Fuisse on my grave. In the meantime, here’s an adapted recipe for sole meuniere via food writer Patricia Wells, who got it from the Montparnasse bistro, Le Dome. 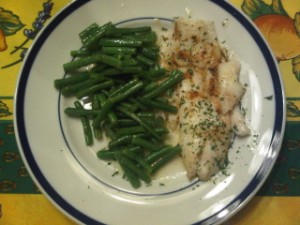