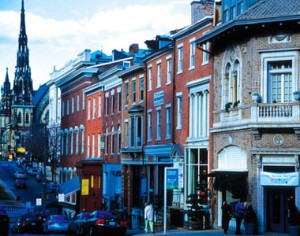 We moved to Baltimore in 1981 so my mother could take a public relations job with a prominent defense contractor based there. Ronald Reagan was president then and although the world was technically at peace, he oversaw the biggest arms buildup in U.S. history. My mother’s job was to promote her company’s missile systems for warships; her colleagues nicknamed her “Lady Launch” and even caricatured her riding the back of a missile fired (presumably) into the former Soviet Union or maybe even Afghanistan. These were heady times full of American might.

For me, part of the lure of moving to Baltimore was the promise of a horse that never actually materialized. My mother spoke of all the green, rolling land in the area and said that once we got settled, I could have the pony I always wanted. She bought me a riding hat and crop, but no horse. Her compromise: Taking us horsebackriding in Hershey, Pa. each fall.

Once we got settled into a townhouse north of downtown, mother decided that maybe Baltimore was not for her. She was a poor defenseless Southern woman, or so she said. And she was trying to make a living in the cold, hard north for her and her two kids. In an effort to plant figurative roots, she bought a tree to plant in the backyard. She said we’d be out of Baltimore before the tree grew higher than our second floor deck. Before we knew it, eight years had elapsed and that tree stood tall and proud (not to mention several feet higher than the deck).

Baltimore had grown on us too. We took out of town visitors to the Inner Harbor and to Orioles games at Memorial Stadium. I remember one of our friends used to haul a large cooler full of beer into the ballpark. She’d prop it up on an empty seat and pull from it the entire game. My sister and I would scramble for player autographs on our hats, baseball cards and programs, shrieking with all the other little kids for Eddie Murray, or Cal Ripken Jr. or Jim Palmer to please, please, please come sign something for us. Please! My sister was a big Ripken fan and she wanted to play shortstop in softball just like Cal did. But my mother was coach and moved her to third base because she had such a good arm. My sister scowled through entire games as a result.

Although I played softball too, I was never much of an athlete. Most Fridays, I’d stay up late watching “Miami Vice” as I fell asleep to the sounds of my next door neighbor playing Atari. The next morning, my mother would drag me out of bed and drive me downtown so I could take French Horn lessons at the Peabody Conservatory of Music. After music lessons, we’d come home and spend Saturdays with the friends. We introduced them to gumbo. They introduced us to steamed — rather than boiled — crabs. I still see the mountain of them sitting atop newspapers my mother had spread out over the wood block ice cream table in the kitchen. The adults sipped cold beer and watched a Penn State game; one said in his typical Baltimore-ese “It don’t get no better than this, hon.”

It certainly didn’t. We moved when I was halfway through eleventh grade and at the time it felt like the most devastating thing that could have happened to me. Although I was born in South Louisiana and spent summers there with family after we moved away, Baltimore has always occupied a sizable piece of real estate in my heart.

Friday night on Twitter, one of my handful of followers was surprised to learn I was an Orioles fan. I explained to him that I grew up with the team and tend to have a soft spot for plucky underdogs with low salary caps. After the Orioles beat the Rangers to move on to the American League Division Series against the Yankees, I decided to make crabcakes to celebrate.

Here’s what they looked like after taking a dip in my cast-iron skillet full of hot oil: 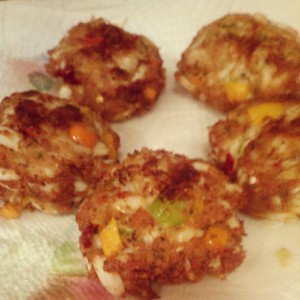 I used fresh crabmeat that I bought Saturday morning at the Red Stick Farmers Market, as well as fresh green onions and orange and red bell peppers I bought there too. The goal was to focus on the sweetness of crab (and the sweetness of the Orioles being in the playoffs for the first time since 1997) by dialing back some of the spice.

So here’s what I did (roughly):

1. I got about a pound of crab meat and put it in a mixing bowl.

2. I chopped about a tablespoon of green onion and diced a little more than a quarter cup of the aforementioned bell peppers. Instead of using cayenne or Cajun seasoning from a bottle, I also diced two dried chiles from my garden. Then I threw that in the bowl with the crabmeat.

3.  I seasoned the contents of the bowl with a little bit of garlic salt, a little bit of sea salt, and a little bit of freshly ground black pepper. Then I added one egg, about one-half cup of bread crumbs (adjust as you see fit) and substituted about a quarter cup of Creole mustard for the usual mayonnaise (which I loathe).

4. I mixed the ingredients together with my hands, working to ensure everything was well-incorporated, and adjusting ingredients as I saw fit. Then I molded the crabmeat mixture into small cakes with my hands, placed the cakes on a plate, and put them in the refrigerator for about an hour.

5. When the hour was up, I poured about an inch of Canola oil into a cast-iron skillet, heated it up and fried each cake on both sides until they were golden brown. The cakes were light with a gentle sweetness, so I served them with a simple green salad, dressed with vinaigrette. In turn, the Orioles and Yankees have served up two nights of great pitching matchups (except for the ninth inning of game one, which I’d prefer not to discuss).