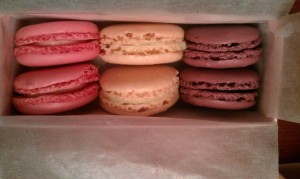 See these? These are macaron cookies from Laduree in Paris. Laduree was founded 150 years ago during a massive economic boom that transformed the city. It became known as a tea room where ladies could visit with each other (sans male companions) without being considered, as Edith Piaf once put it in the song “Milord,” ombres de la rue (translated: shadows of the street, or prostitutes). The folks at Laduree didn’t make macarons in those days, but by the twentieth century they had this bright idea that maybe they could take light-as-air cookies that had been around for centuries and sandwich them together with a thin layer of ganache.

It was a good idea and it became the way to make macarons. Just ask any fashionista who has been in Paris for Fashion Week, or any Franco-geek like me who has attempted to recreate them Stateside after having religious experiences with boxes like the one  pictured above. The cookies are delicate, not overly sweet, and a bit of a scientific marvel, if you ask me. On the face of it, macarons should be easy to make. They have few ingredients and their recipes are fairly straightforward. How hard can it be?  Well, even he admits it’s not so simple, that making picture-perfect macarons is more about technique than it is following a recipe. After reading his The Sweet Life in Paris and staring at the very technical Les Petits Macarons, I decided to venture into this pastel land of no return, hoping that something edible might result from my efforts. The method to my madness: Use Lebovitz’s chocolate macaron recipe (because who hates chocolate?) and refer to Les Petits Macarons in case of trouble (which was sure to come).

I have two things working against me when it comes to making something like this. The first is that I am impatient. I do not like to wait for eggs to come up to room temperature, for example. The second strike against me is that I live in a humid place, which is not good if you happen to be patient enough to allow the aforementioned eggs to come up to room temperature so that you can whip them into a fluffy white meringue. Meringue is a crucial element of macarons.

You see where I’m headed with this.

I started macaron madness on Monday, a day when I was struggling with cookies of the cyber variety. This should have been an omen of sorts, and yet it was not. Absentmindedly, I poured egg whites from two large fresh-from-the-fridge eggs into my KitchenAid stand mixer and waited (and waited and waited and waited) for the magic to happen. While I was waiting and waiting and waiting and waiting, I Googled “How long does it take to make a meringue?” on my phone. The answer: Not this long, sister. I ditched my sorry attempt at meringue, ran to the store for more eggs (and some cream of tartar, just in case. Because it helps.) and by the time I got back home they were just the right temperature for whipping.

I cracked two more eggs, revved up the mixer, added five tablespoons of granulated sugar and got this: 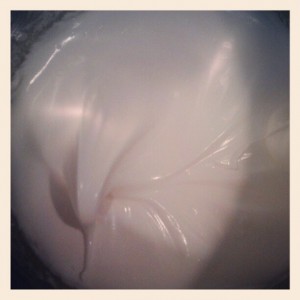 So far so good.

The next step involves dry ingredients: 1 cup of powdered sugar, 1/2 cup of almond flour, 3 tablespoons of Dutch-process cocoa powder. The thing about dry ingredients is that they really do need to be dry (which can problematic with almond flour, which has oils) and fine. You can pulse these ingredients together in a food processor (which resulted in a clumpy dry mix for me, meaning I probably overdid it), or sift them together (much better).

After the ingredients are blended together, you pour them into the meringue and gently fold them in until they are well incorporated, but not over-incorporated because that can make the batter too firm. This appears to be a step you learn through lots of trial and error. The first time I folded things together, the batter got so firm, I could barely fold it anymore. Even so, I put the batter into a pastry bag and piped little quarter-shaped bits of dough onto a Silpat-covered cookie sheet: 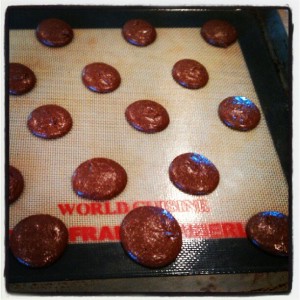 I put the cookie sheet into a 375 degree oven for 15-18 minutes and crossed my fingers. 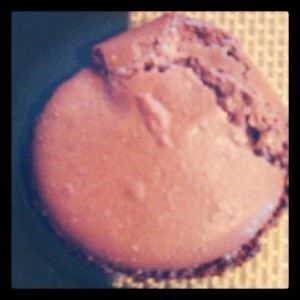 This is what I got. You do not want cracks on the top. You also don’t want slightly-burned edges. And before we start to assume that this bears a striking resemblance to a brownie and could still be edible, let me say this: Do not make that assumption. Because if you get this result, you should pitch it in the trash and start over again, lest you break a tooth on this rock-hard monstrosity. What you want is a smooth thin shell on the top, a soft moist interior and a narrow edge around the bottom of the shell that is called a foot (don’t ask me why).

What adjustments did I make to get close to this? I didn’t beat the batter to death and, per the suggestion of Les Petits Macarons, I baked the shells at 200 degrees for 15 minutes and then for another nine minutes at 350 degrees. Here’s what I got: 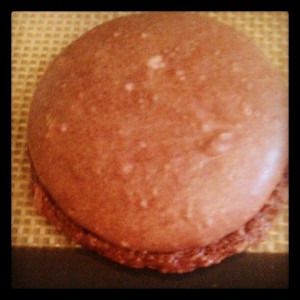 Not perfect, but much better. These things (as with most things) require persistence. While the cookies cooled, I made a chocolate ganache filling by heating 1/2 cup of heavy cream with 2 teaspoons of light corn syrup until it came to a boil. I blended this hot cream with 4 ounces of chopped dark chocolate and 1 tablespoon of unsalted butter. If I weren’t making such an effort to get back into pre-grad school shape (moderation is the name of the game right now, macaron experiments notwithstanding), I’d dive face first into this: 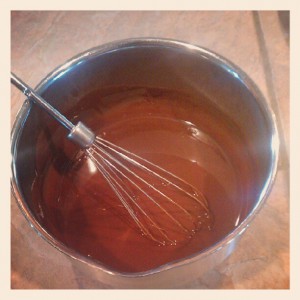 When the ganache and cookies cooled, I spread some of the ganache between two shells for this result: 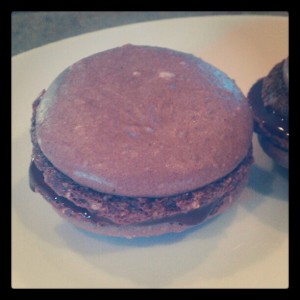 The cookies got good reviews from taste testers (2 family members, 2 neighbors) and cheers from the few kind folks on my Instagram and Twitter feeds who followed the folly. One person even put in a request for a few dozen. But I grew up with her, so I figure she was being sweet.  We’ll see how I’m doing with this in a few weeks…