Every Family in Louisiana Has One 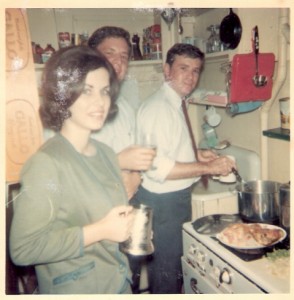 Mom is probably being accused of leaving games early in this picture.

Long before my parents divorced, my mother spent a good number of years telling my father that she didn’t want anyone to know he was her husband. This happened in the early 1970s. Back then, Dad would leave our home in Baton Rouge on Sunday mornings in various states of disrepair from LSU games the night before so he could attend Saints games in New Orleans. My mother thought he was insane (which was partly true) because she couldn’t imagine why anyone would voluntarily get up and invest several hours of one’s time in something that was so bad.

In Mom’s defense, she said she tried to hang in there for about the first six or so years. And by the first six or so years, she meant the first years of the Saints franchise, not of her marriage. She hung in there for 12 years of that. But all during this past season, Mom remembered those early days when she could still bear to watch, even during the 1970 halftime show when a guy shot off his fingers during a re-enactment of the Battle of New Orleans.

“I wonder what happened to that guy,” I asked her.

Her reply: “Oh I think he was okay, but people pretty much forgot about him when the guy with the foot came along.”

She was talking about Tom Dempsey, who kicked a game-winning, 63-yard field goal against the Detroit Lions. Final score: Saints: 19, Lions: 17.

“And to think I almost left that game,” she added.

She left other games and Dad stayed at a lot of them. But is this story and this Super Bowl really about the scores and the games and so forth? Not really. For all that has been written about Hurricane Katrina and rebuilding and uniting the city, for me this game today is about family. Not just my family, but a lot of families in Louisiana who have suffered through the ups and downs, been there for each other through good and bad, and occasionally hurt so much that they just had to look away.

This is about my father, who died two years ago February 5, but who is certainly sitting somewhere nursing a beer and doing his level best not to tell my mother “I told you so.”

This is about my mother, who has devoured every story, every picture, every radio piece about the Saints in recent weeks in spite of the aforementioned history and who has sent me messages admitting that she couldn’t help but cry once the team clinched the NFC in overtime. She’s making red beans and believing right now.

This is about my uncle, who once told me “Every family in Louisiana has one.” He was talking about my father at the time, who I once felt had let me down time and time again. 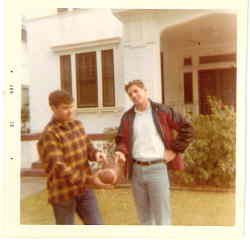 My father and uncle explain that this is a football in their front yard on Carrollton Ave.

But my uncle could have just as easily been talking about those Saints, who people have hung with for 40-some-odd years, paper bags and all.

This is about the friend who bought me a black Saints hat of my very own once I told him how much I liked his. He used to scream strange things about former Saints quarterback Aaron Brooks in the middle of trying LSU games and I used to tell him to get over himself. But I knew in my heart that when you’re born into a family like this – one that sprouts fleur de lis and shouts “Who Dat!” (among other things) – there are certain things you just can’t help. Men are wearing dresses and marching down the street in New Orleans. People are reportedly putting yellow flowers with black ribbons on their loved ones’ graves. There are probably grown men who are thinking about all the games they used to attend with their fathers, who are no longer alive. Stores are closing, people are drinking, things are bubbling on the stove.

Seafood gumbo’s on my stove.  See? 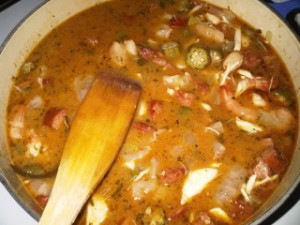 It is time. And my four-year-old daughter is running through the house with a Saints balloon chanting “Who Dat!”

I’ve never seen a Saints game in the Superdome, but I’ve seen plenty of them in the Georgia Dome with my husband, who is an Atlanta Falcons season ticket holder. Yes, the marriage is still intact, in no small part because the Saints are far more superior. I remember the night we sat down to watch the first Saints game in the Superdome after Hurricane Katrina. Before the game, there was a NFL-generated spot in a church where the pastor was talking about rebirth and faith and my husband began to groan about how horrible and corny it was. Just as those words came out of his mouth, New Orleans soul queen Irma Thomas came strutting down the aisle of the church singing “When the Saints Go Marching In.” I sobbed, “How dare you? This isn’t horrible. This is Irma Thomas!”

And then I told him what my team was going to do to his.

That was almost four years ago. Plenty of times since then, I have walked away from the television in disgust only to hide in another room to watch the black and gold with the bedcovers pulled up underneath my chin. There was one season where I couldn’t watch at all, after I saw the way the Colts picked apart the Saints’ secondary in an early season game.

But I believe that won’t happen tonight.

Because I believe, period.