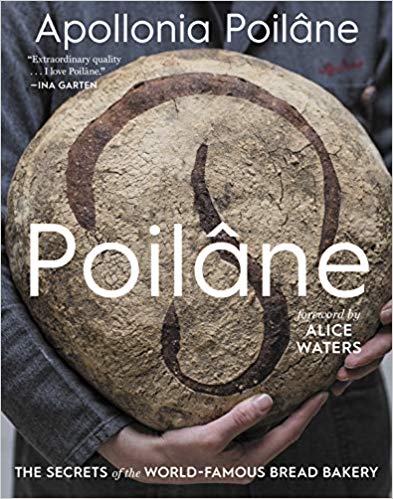 I had mentioned I wasn’t much of a baker in the last post. Any of my prior attempts at bread making have resulted in dense, chewy stuff that lingers in your gut like a boulder. When I heard that Apollonia Poilane was releasing a new cookbook that demystifies some of the secrets of her family’s world-famous bread bakery in Paris, I resolved to buy the book to see if I could replicate some of Poilane’s beautiful rustic sourdough boules, each one of them the circumference of the average hug.

To do this, you build a starter with 2/3 cup of lukewarm water, 1 cup plus one tablespoon of all-purpose flour, 1/3 plus two tablespoons of whole wheat flour, and 1/4 cup of Greek-style yogurt with live active cultures. Poilane acknowledges that her grandfather never would have used yogurt in his starters, but she makes a case for it in this recipe because it jump-starts fermentation and begins to give the dough its slightly sour taste. She also recommends using King Arthur brand flours in the recipe because they have a similar texture to the specially ground ones she uses in her family’s bakery. Combine these ingredients by hand until they’ve become the texture of chewed gum, then cover the bowl with a kitchen towel and set aside in a warm, draft free place for 24 hours.

The next day, take all but one cup of the starter mixture, put it into a new bowl, and then add 4 cups of all-purpose flour, 3 1/4 cups of wheat flour, 1 1/2 tablespoons of active dry yeast, and 2 3/4 cup of lukewarm water with 1 tablespoon of fine sea salt. Combine those ingredients until they are smooth, then knead the dough on a lightly floured surface. Put the dough back into the bowl, cover it with the kitchen towel and wait 45 minutes. By then, your dough should increase in volume, and maintain its shape when you touch it with the back of your hand. Take a colander, line it with a well-floured kitchen towel, and then flatten the dough on a lightly floured surface to 2/3rds its size, working the dough until it becomes a smooth ball. Put the ball of dough smooth side down into the lined colander, and then cover it with a kitchen towel for two more hours. After that time, the dough should increase in size, and continue to maintain its shape after you touch it with the back side of your hand.

Twenty-five minutes before baking, preheat the oven to 475 degrees and place a 12-inch Dutch oven inside. When the oven is ready, remove the Dutch oven carefully, open it, and then flip the dough into the pot with the smooth side facing up. Score the dough with a knife (you can do any sort of design you want, from letters to leaves, to a simple X). Cover the pot and bake for ten minutes, then remove the lid and continue baking until the crust is dark brown and caramelized, about another 45 minutes to an hour.

When the bread is done, turn the loaf out of the pot, stand it on its side, and knock on the bottom. It should sound like someone is knocking on your door because they could smell this amazingness from your oven. Instead of cutting right into the loaf, let it sit and cool for an hour underneath a kitchen towel. Stored in a paper bag or wrapped in a towel, the bread should keep for one week.

The first fermentation, followed by the hit of yeast has so far proven to be exactly how to make the perfect loaf of bread. See: 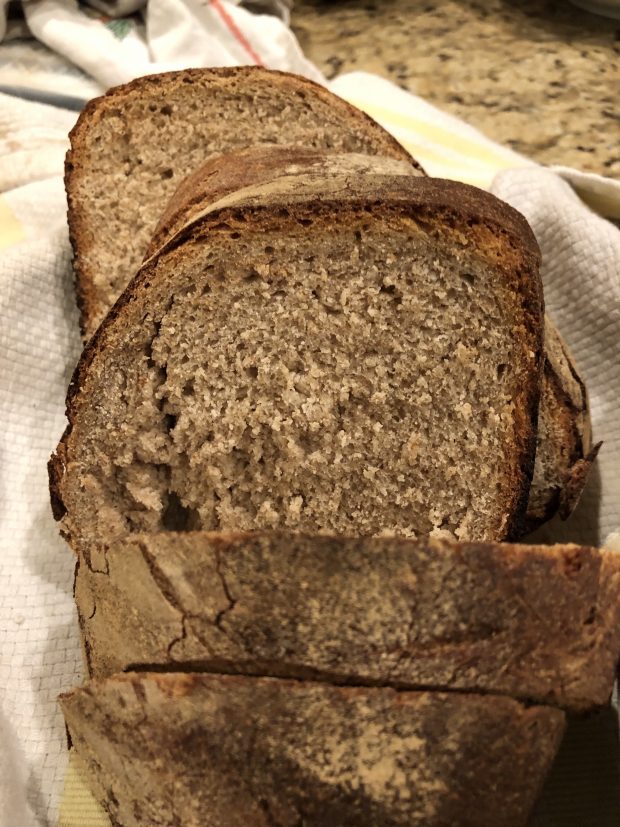 You can adjust this recipe with different flours, or add-ins like walnuts and dried fruit. Once you get the loaf baked, or at least the dough going, you need to decide whether you want to maintain the starter, or cast it aside. Maintaining it is a near-daily ritual of throwing away a cup of the starter, and mixing it with 1 cup of all-purpose flour, 1/2 cup of wheat flour, and 1/2 cup plus two tablespoons of lukewarm water. Over time, the starter deepens in flavor, depending on the time you’ve spent feeding it and the ingredients you’ve been using. But if you can keep it up, it’s a good thing to have on hand as the weather gets cooler and you need something substantial to go with your soup, salad, or charcuterie.

For more on Apollonia Poilane and her family’s bakery, check out Lindsay Tramuta’s interview with her on episode 42 of The New Paris Podcast.