A Wrinkle in Time

I had coffee with my academic advisor yesterday. He told me I looked composed and (believe it or not) relaxed. He also told me this post was “weird” because no one was trying to “get” me, or drag me back for a PhD against my will. I told him it was an ill-conceived joke, just me making fun of my inability to read anything off-topic. And then I told him that I surprised myself when I rewrote the bio for this web site. In an effort to keep myself honest, focused and real in my writing pursuits, I discovered that nothing looks the same, or feels the same, at least bio-wise. He said I needed more time. I told him I don’t wait well.

By the time we had finished our wide-ranging conversation, three hours had elapsed.

And three days after I went through the exercise of “rebranding” myself (or so to speak), I still haven’t posted my effort here. What gives?

A few weeks ago, I finished reading A Wrinkle in Time with my daughter. I didn’t really understand Wrinkle when I read it as a child and certainly wouldn’t have recommended it to any of my friends because fantasy was so not my cup of tea. As an adult, I found myself on the verge of tears as I read it to my seven year old, in part because I have been so tired, but also because it is a curious bit of business to exist in the present, but reside (mentally, at least) 150-some-odd years in the past. I didn’t have a time machine, I didn’t know how to tesser (as they do in Wrinkle), but I did have hundreds of books, countless newspaper articles and a mountain of archival material that transported me into another time and place, so far from South Louisiana in 2012. In order to finish my degree, I had to shut my office door and shut out various social gatherings and interactions with people about whom I care very deeply. I had to fight for that time to think and write as if I were in nineteenth century Paris (various downloads of Bizet, Massenet, Offenbach and so forth fueled my journey) just so I could finish my degree. I felt guilty about it, every step of the way. Something always suffered. On the other hand, it was a great lesson for me because I can’t do everything or be everything anyway. If Wrinkle teaches us anything, it’s that humans are imperfect beings, but part of being human — and truly grown up — is forgiving those imperfections and leaving doors open to people (like myself, I guess) who have passed into a social or behavioral fifth dimension, of sorts. I have been happy in recent weeks to walk back through those open doors and reconnect with life on the other side.

In some respects, I have felt like little Charles Wallace, a character in Wrinkle who became captive of a pulsing brain. It has been helpful to have people standing there, as his sister did, arms outstretched, saying “I love you…I love you…I love you…I love you” in order to break the brain’s spell and clear out the footnotes and bibliographies swimming through my head. And yet, while I now have time to bust clutter, host playdates, watch movies (!!!), slowly catch up with friends, putter in my garden and knit a sweet little bluebird for a friend’s new baby (among other things), I know that there is a part of my head that remains in the City of Light’s ninth arrondissement.

I may never escape that feeling and know that I’ll need to revisit mid-nineteenth century Paris before too long. 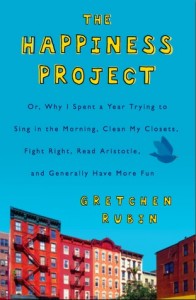 I used to follow Gretchen Rubin’s Happiness Project blog pretty religiously until I spent two years reading books that viewed heresy through an economic lens or argued that there’s no muse in art because it’s all political (or something to that effect). Last week, I really enjoyed reading Rubin’s Happiness Project book . Throughout the year she spent test-driving happiness theories, people asked her what a successful, well-educated woman with a beautiful family had to be miserable about. And it wasn’t that she was miserable. It’s that she was looking for ways to feel in control of her life, which generally leads to a happier existence for yourself and everyone else around you. She explores things such as busting clutter, acting the way you want to feel, trying something new and so on. And at the end of that year, she found that the exercise taught her to be more kind and patient, more light-hearted, more in control and, well, happier (or at least better able to deal with the usual battery of things that life deals the average person).

Some helpful things I do: Hourlong walks at least 4 days a week, a good night’s sleep, making up beds first thing in the morning, maintaining a vegetable garden, doing my best not to leave any task sitting for too long. I’m trying to get back into using this blog (Rubin blogs five days a week; I may not be that prolific), my yoga practice and reconnecting with old friends (or at least friends who haven’t heard from me all that much in the past two years). I’d like to start a small book group and maybe even take ballet lessons…for the heck of it.

What do you do to stay happy and feel connected and in control? 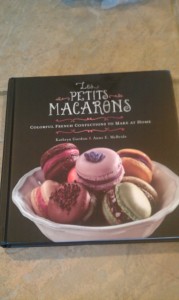 One of the drawbacks of this past Paris trip is that I developed a taste for Laduree macarons and there is no Laduree outpost in South Louisiana. I’m not even sure where I’d find a great macaron in my neck of the woods. So a friend of mine procured the above book for me as a graduation present and I’ve spent a week in awe of both the process (it’s not so simple) and the possible flavor combinations (both sweet and savory!) one can explore. Macarons are not for the faint of heart. Things need to be measured just so, blended just so, cooked just so. And if you fail to compose these goodies with the required precision, you will be punished with a subpar treat. We can’t have this! I aim to make the perfect macaron by the final day of the Tour de France (which is my favorite day, and a day where I foolishly try to make the perfect baguette or onion soup). I’ll be sharing my efforts here, along with any feedback willing taste-testers have to offer. First up is a basic chocolate macaron and then we’ll see where our palate takes us after that. If you have any flavor suggestions, baking tips, or claims that I’m in over my head, please share them in comments.